LA JOLLA, CA—When you eat may be just as vital to your health as what you eat, found researchers at the Salk Institute for Biological Studies. Their experiments in mice revealed that the daily waxing and waning of thousands of genes in the liver—the body’s metabolic clearinghouse—is mostly controlled by food intake and not by the body’s circadian clock as conventional wisdom had it.

“If feeding time determines the activity of a large number of genes completely independent of the circadian clock, when you eat and fast each day will have a huge impact on your metabolism,” says the study’s leader Satchidananda (Satchin) Panda, Ph.D., an assistant professor in the Regulatory Biology Laboratory.

The Salk researchers’ findings, which will be published in a forthcoming issue of the Proceedings of the National Academy of Sciences, could explain why shift workers are unusually prone to metabolic syndrome, diabetes, high cholesterol levels and obesity. 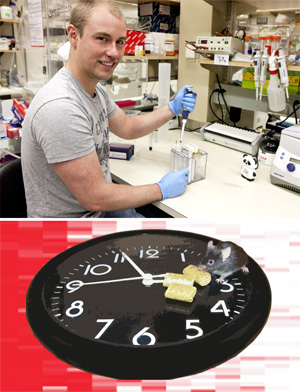 “We believe that it is not shift work per se that wreaks havoc with the body’s metabolism but changing shifts and weekends, when workers switch back to a regular day-night cycle,” says Panda.

In mammals, the circadian timing system is composed of a central circadian clock in the brain and subsidiary oscillators in most peripheral tissues. The master clock in the brain is set by light and determines the overall diurnal or nocturnal preference of an animal, including sleep-wake cycles and feeding behavior. The clocks in peripheral organs are largely insensitive to changes in the light regime. Instead, their phase and amplitude are affected by many factors including feeding time.

The clocks themselves keep time through the fall and rise of gene activity on a roughly 24-hour schedule that anticipates environmental changes and adapts many of the body’s physiological function to the appropriate time of day.

“The liver oscillator in particular helps the organism to adapt to a daily pattern of food availability by temporally tuning the activity of thousands of genes regulating metabolism and physiology,” says Panda. “This regulation is very important, since the absence of a robust circadian clock predisposes the organism to various metabolic dysfunctions and diseases.”

Despite its importance, it wasn’t clear whether the circadian rhythms in hepatic transcription were solely controlled by the liver clock in anticipation of food or responded to actual food intake.

He found that putting mice on a strict 8-hour feeding/16-hour fasting schedule restored the circadian transcription pattern of most metabolic genes in the liver of mice without a circadian clock. Conversely, during prolonged fasting, only a small subset of genes continued to be transcribed in a circadian pattern even with a functional circadian clock present.

“Food-induced transcription functions like a metabolic sand timer that runs for 24 hours and is continually reset by the feeding schedule while the central circadian clock is driven by self-sustaining rhythms that help us anticipate food, based on our usual eating schedule,” says Vollmers. “But in the real world we don’t eat at the same time every day and it makes perfect sense to increase the activity of metabolic genes when you need them the most.”

“Our study represents a seminal shift in how we think about circadian cycles,” says Panda. “The circadian clock is no longer the sole driver of rhythms in gene function, instead the phase and amplitude of rhythmic gene function in the liver is determined by feeding and fasting periods—the more defined they are, the more robust the oscillations become.”

While the importance of robust metabolic rhythms for our health has been demonstrated by shift workers’ increased risk of developing metabolic syndrome, the underlying molecular reasons are still unclear. Panda speculates that the oscillations serve one big purpose: to separate incompatible processes, such as the generation of DNA-damaging reactive oxygen species and DNA replication.

Panda, for one, has stopped eating between 8 pm and 8 am and says he feels great. “I even lost weight, although I eat whatever I want during the day,” he says.

The work was funded in part by the National Institutes of Health and the Pew Scholars Program in Biomedical Sciences.

About the Salk Institute for Biological Studies:
The Salk Institute for Biological Studies is one of the world’s preeminent basic research institutions, where internationally renowned faculty probe fundamental life science questions in a unique, collaborative, and creative environment. Focused both on discovery and on mentoring future generations of researchers, Salk scientists make groundbreaking contributions to our understanding of cancer, aging, Alzheimer’s, diabetes, and cardiovascular disorders by studying neuroscience, genetics, cell and plant biology, and related disciplines.