LA JOLLA, CA—A uniquely collaborative study by researchers at the Salk Institute for Biological Studies uncovered a novel mechanism that turns up glucose production in the liver when blood sugar levels drop, pointing towards a new class of drugs for the treatment of metabolic disease.

Their findings, published in the May 13, 2011, issue of the journal Cell, revealed a crucial role for so called histone deacetylases (HDACs), a group of enzymes that is the target of the latest generation of cancer drugs. HDACs get sugar production rolling when blood glucose levels run low after prolonged periods of fasting or during the night.

“In liver cells, so-called class II HDACs are usually sequestered outside the nucleus but in response to fasting signals they quickly shuttle into the nucleus where they help turn on genes needed for glucose production,” says Howard Hughes Medical Institute early career scientist Reuben J. Shaw, Ph.D., an assistant professor in the Molecular and Cell Biology Laboratory. “Thus drugs that specifically inhibit HDACs involved in gluconeogenesis may be very useful for the treatment of diabetes and metabolic syndrome.”

A delicate and tightly regulated balance between de novo glucose production in liver and caching surplus glucose in muscle and fat tissue keeps our blood sugar levels from fluctuating erratically and causing irreparable damage to cells and tissues in the body.

After a meal, insulin instructs muscle cells to squirrel away glucose for later use and turns off sugar production in the liver ensuring that blood sugar levels don’t rise too high. Conversely, the fasting hormone glucagon signals liver cells to flip on glucose production when supplies run low.

In many patients with type II diabetes, however, the body turns a deaf ear to insulin’s urgent message and as a result the liver acts like a sugar factory on overtime, churning out glucose throughout the day, even when blood sugar levels are high. The most widely used drug to control blood glucose levels in type II diabetics is currently metformin. 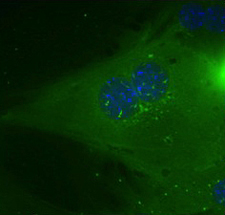 In liver cells, so called class II HDACs (shown in green) are usually sequestered in the nucleus. 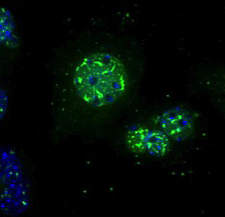 In response to glucagon, HDACs quickly move into the nucleus, where they help turn on genes needed for the production of glucose in the liver.

“Metformin is originally derived from a plant found in Western Europe called ‘French lilac’ or ‘Goat’s Rue’ because goats didn’t like to eat it,” says Shaw. “They steered clear of the plant because it contains a compound that acts to naturally lower blood glucose in animals that eat it-to prevent them from eating it again.”

A few years ago, Shaw had discovered how metformin helps insulin to control glucose levels. It binds to a “metabolic master switch” known as AMPK that blocks glucose production in the liver. Trying to identify novel targets of AMPK that might be relevant to diabetes Maria Mihaylova, a graduate student in the Shaw laboratory, focused her efforts on a family of HDACs known as class II HDACs. They function as negative regulators of gene activity by stabilizing the tightly coiled structure of DNA in chromosomes, making it inaccessible to proteins that transcribe DNA.

“We identified class II HDACs as direct targets of AMPK in a bioinformatics-based screen, but we didn’t know which genes they might regulate in liver since they weren’t even known to be found there,” says Mihaylova. Working closely with Howard Hughes Medical Institute Investigator Ronald M. Evans, a professor in the Salk Institute’s Gene Expression Laboratory, and his team, Mihaylova found that inhibiting class II HDACs shut down genes encoding enzymes needed to synthesize glucose in liver.

In collaboration with her colleagues in Marc Montminy’s lab, a professor in the Clayton Laboratories for Peptide Biology and like Shaw and Evans a member of the Center for Nutritional Genomics at the Salk Institute, Mihaylova discovered that HDACs themselves associated with the DNA regulatory elements controlling the expression of the glucose synthesizing enzymes, but they only flocked there after she had treated cells with the fasting hormone glucagon.

“In response to the glucagon, chemical modifications on class II HDACs are removed and they can translocate into the nucleus,” she explains. There, they bind to FOXO, a key metabolic regulator, which had been shown previously to be shut down by insulin.

“It came as a big surprise that FOXO is activated by glucagon,” explains Shaw. Further experiments confirmed that the genetic suppression of class II HDACs in liver cells led to an increase in acetylated FOXO, which now can neither bind DNA nor activate the genes encoding glucose-synthesizing enzymes.

A parallel study, led by Montminy and published in the same issue of Cell as Shaw’s paper, shows that in fruit flies, FOXO not only controls the expression of a fat-digesting enzyme but is activated by a glucagon-like hormone in a manner similar to human FOXO. “The central circuitry of how animals regulate metabolism in response to fasting and feeding is conserved from fly all the way to man emphasizing the importance of class II HDACs in coordinating how different hormones direct the creation and use of glucose,” says Shaw, who is a co-author on Montminy’s paper.

Up to this point, all experiments had been performed in cultured cells but Shaw and this team were really interested in whether class II HDACs controlled blood glucose in mouse models of diabetes. Strikingly, suppression of all three HDACs simultaneously restored blood glucose levels to almost normal in four different models of type 2 diabetes.

“These exciting results show that drugs that inhibit the activity of class II HDACs may be worthwhile to be pursued as potential diabetes drugs,” says Shaw. Recently, many drug companies have been developing HDAC inhibitors as anti-cancer drugs, so Shaw speculates that some of these compounds, which may or may not be useful for cancer, could have therapeutic potential for the treatment of insulin resistance and diabetes.

“The key will be to specifically block HDACs involved in glucose control,” he says “but the fact gluconeogenesis takes place in the liver makes this task easier as most drugs sooner or later travel to the liver once they hit the bloodstream.” Shaw next plans to test whether these glucose loving HDACs may also play roles in certain forms of cancer as well.

Researchers who also contributed to the work include Debbie S. Vasquez and Pierre-Damien Denechaud in the Molecular and Cell Biology Laboratory, Kim Ravnskjaer in the Clayton Laboratories for Peptide Biology, Ruth T. Yu, Jacqueline G. Alvarez and Michael Downes in the Gene Expression Laboratory.

This work was supported by grants from the National Institutes of Health, the American Diabetes Association, the Howard Hughes Medical Institute, and significant support for this study came from The Leona M. and Harry B. Helmsley Charitable Trust.

The Center for Nutritional Genomics was established in 2008 with a grant from The Leona M. and Harry B. Helmsley Charitable Trust to specifically study fundamental mechanisms underlying the development and treatment of diabetes and metabolic disease.