LA JOLLA–A single stem cell has the potential to generate an animal made of millions of different types of cells. Some cancers contain stem-like but abnormal cells that can act like mini factories to rapidly churn out not only more copies of themselves, but also variants that are able to better survive in the challenging and changing environments to which cancers are exposed. Worse still, these stem cell-like cancers can spread to other tissues in the body, causing metastasis.

Researchers at the Salk Institute demonstrated how a single master gene, called Sox10, controls if–and to what extent–cells turn into these potentially dangerous factories. This new understanding of Sox10 could help point the way to more efficient therapies for drug-resistant cancers.

“One of the problems with a cancer mass is that it isn’t uniform. You might think of it like the microclimates leading from the Salk Institute down to the beach: some areas have rain and lots of plants while others get sun and look like a desert. Just like plants adapting to different environments, the cancer cells do the same, making some sensitive and other resistant to treatments. We have to be able to confront this tumor heterogeneity to fight cancers more effectively,” says Geoffrey Wahl, professor of Salk’s Gene Expression Laboratory and senior author of the work, published September 10, 2015 in Cell Reports. “We’ve found that Sox10 is one type of master regulator able to unlock the cell fate door to enable cells to adopt different identities to adapt to different tumor microenvironments.”

For example, this stem cell-like ability is present in an aggressive form of the disease known as triple negative breast cancer (TNBC). TNBC lacks three of the most common targets for breast cancer therapy and makes up about 20 percent of breast cancers in the United States; it also has overactive levels of Sox10. Other labs have shown that high levels of Sox10 are also present in melanoma, another highly metastatic disease.

In the new work, the team looked for genes that were present at high levels in both normal mammary stem cells and breast cancer tissue. One gene that stood out was Sox10, which is part of a group of genes known to control how cells differentiate into mature tissues. Christopher Dravis, the lead author of the study, found that specialized mammary cells with the greatest ability to create different cell types, known as plasticity, had higher levels of Sox10 expression. If the team removed Sox10 from the cells, the cells lost that ability.

Aside from determining how powerful a factory these cells became, high levels of the Sox10’s protein in the right conditions caused a totally unexpected property to arise: the cells became mobile and invaded surrounding areas.

“We have functional evidence linking Sox10 to all of the most dangerous aspects of tumor progression–growth potential, plasticity and spreading, which indicates that Sox10 may be driving these same deadly functions in breast cancers,” says Dravis. 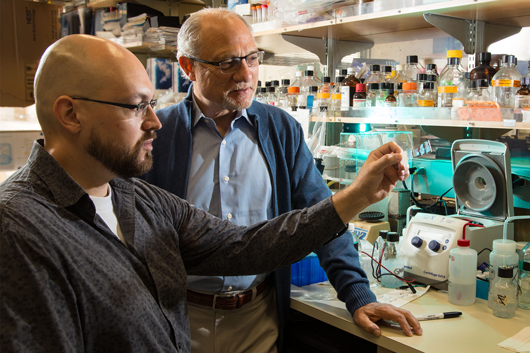 The group plans to test whether eliminating the function of Sox10 could be a way to fight the disease and block metastasis. “Our hope is that continued study of this critical gene will identify other signaling pathways we can inhibit to block the breadth of functions induced by Sox10 that appear to favor tumor progression,” says Dravis.

Another potential application, adds Wahl, is that Sox10 could act as a light bulb to help researchers see the cells that are beginning to move, acting as a faster test for metastatic breast cancer.

“This type of curiosity-driven science aims to understand the basic principles of how an organism is formed and then apply those findings to a very important disease,” says Wahl, who holds Salk’s Daniel and Martina Lewis Chair. “We hope everyday we can bring this work out of the lab to the clinic because it is the patient who we feel ultimately responsible to.”

Other authors include Benjamin T. Spike, Claire Johns and Christy Trejo of the Salk Institute; E. Michelle Southard-Smith of Vanderbilt University; and Charles M. Perou and J. Chuck Harrell of the University of North Carolina at Chapel Hill.

The work was funded by the National Institutes of Health, the Department of Defense,
Susan G. Komen for the Cure and the Breast Cancer Research Foundation.