LA JOLLA, CA—Salk researcher Edward M. Callaway, a professor in the Systems Neurobiology Laboratories has been awarded the distinction of AAAS Fellow for his “distinguished research on the organization and function of neocortical circuits.”

Election as a Fellow of the American Association for the Advancement of Science is an honor bestowed upon members by their peers for their scientifically or socially distinguished efforts to advance science. The tradition of AAAS Fellows began in 1874. The new fellows will be honored during the 2011 AAAS annual meeting in Washington D.C. on Feb. 19. 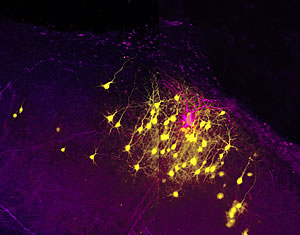 Ed Callaway pioneered a method that allows him to trace a single neuron’s connections to its neighbors.

This year’s election of Dr. Callaway brings the total number of Salk Institute faculty currently designated as AAAS fellows to 13.

About AAAS:
The American Association for the Advancement of Science (AAAS) is the world’s largest general scientific society, and publisher of the journal, Science (www.sciencemag.org). AAAS was founded in 1848, and includes some 262 affiliated societies and academies of science, serving 10 million individuals. Science has the largest paid circulation of any peer-reviewed general science journal in the world, with an estimated total readership of 1 million. The non-profit AAAS (www.aaas.org) is open to all and fulfills its mission to “advance science and serve society” through initiatives in science policy; international programs; science education; and more. For the latest research news, log onto EurekAlert!, www.eurekalert.org, the premier science-news Web site, a service of AAAS.