Salk scientists identify how immune cells use two critical receptors to clear dead cells from the body, pointing the way to new autoimmune and cancer therapies.

Salk scientists identify how immune cells use two critical receptors to clear dead cells from the body, pointing the way to new autoimmune and cancer therapies.

UPDATE: Additional research from the Salk Institute published September 29 in eLife further details how the two receptors are critically different, having implications for treatments for autoimmune disease.

LA JOLLA—In most of the tissues of the body, specialized immune cells are entrusted with the task of engulfing the billions of dead cells that are generated every day. When these garbage disposals don’t do their job, dead cells and their waste products rapidly pile up, destroying healthy tissue and leading to autoimmune diseases such as lupus and rheumatoid arthritis.

Now, Salk scientists have discovered how two critical receptors on these garbage-eating cells identify and engulf dead cells in very different environments, as detailed September 7 in Nature Immunology and September 29 in eLife. 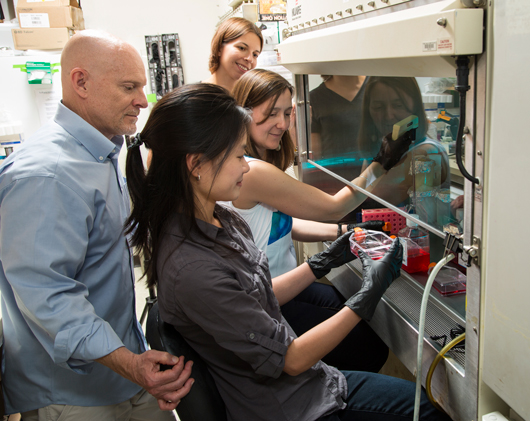 “To target these receptors as treatments for autoimmune disease and cancer, it’s important to know exactly which receptor is doing what. And this discovery tells us that,” says senior author of the work Greg Lemke, Salk professor of molecular neurobiology and the holder of Salk’s Françoise Gilot-Salk Chair.

The garbage-disposing cells, known as macrophages, have arrays of receptors on their surface, two of which—called Mer and Axl—are responsible for recognizing dead cells in normal environments and inflamed environments, respectively. Mer operates as a “steady-as-she-goes” receptor, clearing out dead cells in healthy tissues on a daily basis. Axl, in contrast, acts as an “all-hands-on-deck” receptor, kicking macrophages into action in inflammatory settings that result from infection or tissue trauma. These inflamed environments have many more dead cells.

“We thought Axl and Mer were doing the same job, and they are: they both recognize a so-called ‘eat me’ signal displayed on the surface of dead cells. But it turns out that they work in very different settings,” says Lemke, whose lab first discovered the two receptors—which, along with a third, make up the TAM family—two decades ago. Lemke and colleagues explored the roles of TAM receptors in the brain initially, but observed that the absence of these receptors had dramatic effects on the immune system, including the development of autoimmune disease. The receptors have since become a growing focus for cancer and autoimmune research, and previous work has found that these three receptors are important in other areas, including the intestines, reproductive organs and vision.

“This basic research focus allowed us to discover a completely new aspect of immune regulation that no one—including any immunologist—had known about before,” adds Lemke. 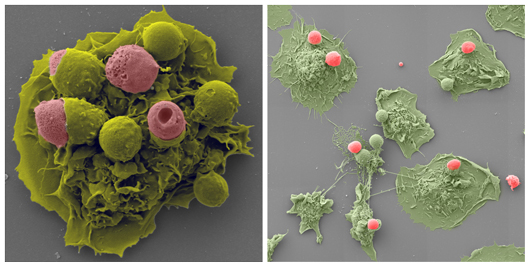 In the new work, the researchers found multiple critical differences between Axl and Mer.

“We compared the behavior and regulation of the receptors, and the results were very striking,” says Anna Zagórska first author of the Nature Immunology paper, which detailed Axl and Mer’s two different roles. “In response to many different pro-inflammatory stimuli, Axl was upregulated and Mer was not. In contrast, immunosuppressive corticosteroids, which are widely used to suppress inflammation in people, upregulated Mer and suppressed Axl. These differences were our entry point to the study.”

“Understanding how these two receptors act differently—one during inflammation and one during homeostasis—will allow us to design targeted therapies for a number of autoimmune diseases,” says Erin Lew, first author of the eLife paper published on September 30, which demonstrated how the two receptors use different molecules—called ligands—to become activated. For both receptors, their ligands must bind to the ‘eat-me’ signal on the surface of dead cells and simultaneously to the receptors to activate the garbage-disposing mechanism of the cell.

The work further details how Axl’s ligand, once engaged, is quickly cleaved off of the surface of the macrophage. Levels of the free-floating Axl in the blood have turned out to be an accurate, general biomarker for inflammation, quickly showing up in the circulation after tissue trauma or injury.

Next, the researchers are looking into each receptor’s activity in more detail. The team is finding that these receptors are unusual in that they have a three-step binding procedure, whereas most cell receptors bind in one step. Exploring and understanding this process will help to lead to more targeted therapeutics for cancers and other diseases in which the receptors are thought to act.

Authors on the Nature Immunology paper include Anna Zagórska, Paqui Través, Erin Lew, Ian Dransfield and Greg Lemke.
The work was funded by the National Institutes of Health, the Leona M. and Harry B. Helmsley Charitable Trust, the Nomis Foundation, the H.N. and Frances C. Berger Foundation, the Fritz B. Burns Foundation, the HKT Foundation, the Human Frontiers Science Program, and the Leukemia and Lymphoma Society.