LA JOLLA, CA—For many migraine sufferers, bright lights are a surefire way to exacerbate their headaches. And for some night-shift workers, just a stroll through a brightly lit parking lot during the morning commute home can be enough to throw off their body’s daily rhythms and make daytime sleep nearly impossible. But a new molecule that selectively blocks specialized light-sensitive receptors in the eyes could help both these groups of people, without affecting normal vision according to a study published August 25, 2013 in Nature Chemical Biology.

“It took almost ten years to find and test a molecule that fit all the properties and acted in vivo as we wanted,” says senior study author Satchidananda Panda, an associate professor in Salk’s Regulatory Biology Laboratory. 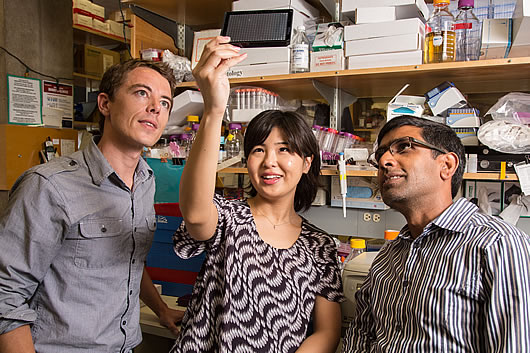 Scientists have known for nearly a century that humans and animals can sense light even when they can’t see. Before they’ve opened their eyes, and even before cells that allow vision have matured, newborn mice still scurry away from bright lights, and set their sleep-wake cycles based on the patterns of light and dark throughout the day. The same is true of many blind people-though they can’t see what’s in front of them, their bodies still follow daily circadian rhythms, and the pupils of their eyes constrict in response to light.

More than ten years ago, Panda’s lab group discovered that melanopsin, a receptor found in neurons connecting the eyes and brain, is responsible for sensing light independently of normal vision. Since then, researchers have determined that the receptor is vital for maintaining sleep cycles and other circadian rhythms in those with healthy vision, constricting the pupil of the eye in bright light, and potentially exacerbating the light-sensitivity associated with migraine headaches. While melanopsin senses light for these non-vision purposes in the body, closely related receptors-rhodopsin and cone opsins-provide vision-forming information to the brain.

Panda figured that if he could find a compound that blocked melanopsin, but not rhodopsin or cone opsins, it could pave the way toward treating migraines or circadian rhythm imbalances. Scientists already know of one class of compounds, retinoids, which interact with opsins, but they’re non-specific and so bind to melanopsin, rhodopsin, cone opsins, and a whole handful of other receptors in the body, causing widespread side effects. Panda wanted something more specific. So for ten years, his lab group, in collaboration with scientists at the pharmaceutical company Lundbeck, has attempted to find chemical compounds that specifically shut off melanopsin in animals.

In their latest search, Panda and his collaborators turned to the Lundbeck library of diverse compounds. In hundreds of 384-well plates, a team led by Ken Jones at Lundbeck tested whether each chemical from the library turned off melanopsin by measuring the calcium levels after the plate was exposed to light. When melanopsin is functioning, calcium levels increase after light exposure indicating that light has been sensed and a signal is being generated. Several compounds from the chemical library stopped this calcium increase from happening, suggesting that they were blocking the function of melanopsin.

None of these compounds looked like retinoids, so it was an exciting breakthrough, Panda says. The chemicals, dubbed opsinamides, also showed no interaction with rhodopsin or other opsins. “We wanted to make sure they were specific to melanopsin,” says Panda. To find out whether the opsinamides would have a physiological response in addition to binding to melanopsin in bench experiments, Megumi Hatori and Ludovic Mure from Panda’s Salk lab group next looked at whether the drug affected the pupillary constriction in mice. Normally, in extremely bright light, the pupil of the eye shrinks to its smallest size. But when the mice were treated with one of the opsinamides, their pupils didn’t shrink as usual. Most importantly, the drug had no detectable effect in mice lacking melanopsin, further showing its specificity for melanopsin. Finally, newborn mice treated with the compound no longer avoided bright lights. The results, Panda says, show that the drug is stopping melanopsin from signaling the brain when the eyes are exposed to bright light.

“So far, everything known about melanopsin has been discovered using knock-out mice that completely lack the receptor,” says Panda. “So this offers a new way to study the protein.” Kenneth Jones, the former project head at Lundbeck, notes that “the two compounds require further optimization in anticipation of clinical testing but are extraordinarily useful for research purposes and as leads in the discovery process.” Co-author Jeffrey Sprouse has co-founded a start-up company, Cyanaptic, to do just that.

Once more effective compounds are developed, Panda expects that they could eventually have utility in a variety of clinical settings. “There are many people who would like to work when they have migraine pain exacerbated by light,” he says. “If these drugs could stop the light-sensitivity associated with the headaches, it would enable them to be much more productive.”

Moreover, Panda says, the drugs could help shift-workers set their sleep schedules without exposure to sunlight interfering with their circadian rhythms. His lab group doesn’t yet have results on how the drugs affect circadian rhythms, but based on the known mechanisms of melanopsin, Panda says that it is likely the new opsinamides alter sleep.

The work was supported by grants from the Hearst Foundations, the National Institutes of Health, the Japan Society for the Promotion of Science, and the Catharina Foundation. Six of the authors were employees of Lundbeck Research USA during the period of time that the experimental work was conducted.