LA JOLLA, CA—Scientists at the Salk Institute for Biological Studies have discovered a key genetic switch by which plants control their response to ethylene gas, a natural plant hormone best known for its ability to ripen fruit, but which, under stress conditions, can cause wilted leaves, premature aging and spoilage from over-ripening. The findings, published August 30 in Science magazine, may hold the key to manipulating plants’ ethylene on/off switch, allowing them to balance between drought resistance and growth and, therefore, decrease crop losses from drought conditions. 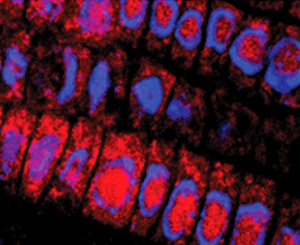 Plants sense—or smell—ethylene, which triggers a cascade of events in their cells. Ethylene sensors in the cells send a signal to the nucleus, the cells’ central DNA-containing compartment, which initiates genetic programs so the plant can make changes according to the conditions it faces. Scientists, including Ecker and his team, have identified the functions of a number of key regulators in the ethylene signaling pathway, including the protein EIN2 (ethylene insensitive 2).

The EIN2 protein is located in the endoplasmic reticulum, the part of the cell that facilitates the transport of proteins within the cell, and plays an essential role in ethylene signaling. The protein’s function, however, remains enigmatic. Through a variety of sophisticated tests, Ecker’s team uncovered a mechanism by which EIN2 protein processing in the endoplasmic reticulum and movement of signaling molecules into the nucleus are required to activate the ethylene response.

The most severe drought in 25 years is impacting crops across the United States, with the potential to wipe out farmers’ incomes and raise food prices. Plant researchers are studying stress conditions in order to improve crop production, which has become more urgent as farmers around the world face climate issues such as drought and extreme temperatures. Curbing crops’ susceptibility to certain stressors could allow for higher yields during droughts and possibly allow drier climates to support profitable crops and feed the world’s growing population.

“Growers can opt to spray their plants with an ethylene inhibitor,” says Hong Qiao, a postdoctoral researcher in Ecker’s laboratory and first author of the paper. “This blocks the plant’s ethylene receptors from smelling ethylene, which has an effect on growth. Without the ethylene response pathway, a tomato would never ripen. Too much ethylene, and the tomato over-ripens. Therefore, basic knowledge of the precise mechanism by which plants control the response to ethylene gas will lead to better ways to control these processes in crop plants.”

Other researches on the study were Shao-shan Carol Huang, Robert J. Schmitz and Mark A. Urich, from the Salk Institute; and Zhouxin Shen and Steven P. Briggs of the University of California, San Diego.

The work was supported by grants from the National Science Foundation, the Howard Hughes Medical Institute and the Gordon and Betty Moore Foundation.