LA JOLLA, CA—In analyzing the molecular sensor for the plant growth hormone brassinolide, researchers at the Salk Institute for Biological Studies discovered that although plants took an evolutionary path different from their animal cousins, they arrived at similar solutions to a common problem: How to reliably receive and process incoming signals.

The team’s findings, published in the February 1, 2011 issue of Genes and Development, revealed that so-called tyrosine phosphorylation—used as an “on” or “off” switch and long thought to be a feature unique to animal cells—is a mechanism conserved across the animal and plant kingdoms.

“There seem to be only so many ways to build a robust signaling system,” says Howard Hughes Medical Institute investigator Joanne Chory, Ph.D., professor and director of the Plant Molecular and Cellular Biology Laboratory and holder of the Howard H. and Maryam R. Newman Chair, “and plants and animals have hit upon the same mechanisms.” 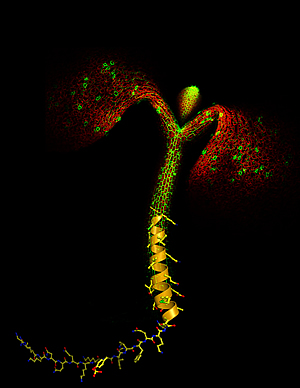 Despite their divergent evolutionary history, membrane-bound kinase receptors in animals and plants rely on similar regulatory mechanisms to control their activity.

As different as they may seem, both mammalian and plant cells need to be able to perceive small molecules to respond to changes in the environment. While human cells draw on a wide variety of sensor molecules, including more than 800 different G-protein-coupled receptors, 48 known nuclear hormone receptors and 72 receptor kinases, plants rely mostly on the latter.

“This group of receptors is by far the largest one in plants,” says postdoctoral researcher and co-first author Michael Hothorn, “but we don’t know much about the activation mechanism apart from ‘there’s a bunch of new phosphorylations.'”

Kinases are proteins that transfer phosphate groups to other proteins or small molecules. They come in two principal flavors: They either attach the phosphate group to the amino acid tyrosine within the protein or to serine or threonine. While most protein kinases have serine/threonine kinase activity, in animals, so called receptor kinases, which sit at the cell surface, mostly possess tyrosine kinase activity.

With the exception of a small handful of dual-specificity kinases, which transfer phosphates to both serine/threonine and tyrosine, all plant receptor kinases have been pegged as serine-threonine kinases. One of few known outliers is the receptor for brassinolide, a key element of plants’ response to light. “Binding of brassinolide to its receptor allows plants to adjust growth when they need to outcompete their neighbors to reach more light or water,” explains postdoctoral researcher and co-first author Yvon Jaillais. “But at the same time the receptor needs to be tightly regulated so plants don’t waste their resources when they don’t have to.”

The brassinolide receptor BRI1 is kept in a relatively inactive state by its intracellular tail and a small inhibitory protein known as BKI1. Based on earlier studies in Chory’s lab, the Salk researchers knew that autophosphorylation of the receptor was necessary, but what triggered the release of the inhibitory protein remained unclear.

In an effort to understand the activation mechanism, the Salk researchers discovered that BKI1 acts through two evolutionarily conserved motifs: a 20-amino-acid sequence that binds the receptor kinase domain and a lysine-arginine-rich motif that anchors the inhibitory peptide to the plasma membrane. Phosphorylation of a key tyrosine within the membrane-targeting motif releases BKI1 from the membrane, relieving kinase inhibition and allowing the formation of an active signaling complex.

The phosphorylation of BKI1 is not only the first documented example of tyrosine transphosphorylation in plants, the underlying principle also closely resembles the mechanism used by bona fide receptor tyrosine kinases to regulate their activity. “Plant and animal receptor kinases evolved independently, yet their activation relies on similar mechanisms,” says Chory.

By defining common features in plant and animal receptor signaling pathways, the Salk researchers hope to learn more about what the requirements for a robust signaling system are. Although plants don’t encode canonical tyrosine kinases in their genomes, tyrosine phosphorylation will emerge as an important topic in plant signaling, predicts Hothorn.

Researchers who also contributed to the work include Yousseff Belkhadir and Tsegaye Dabi in the Plant Biology Laboratory at the Salk Institute, as well as Zachary L. Nimchuk and Elliot Meyerowitz in the Division of Biology at the California Institute of Technology in Pasadena, California.