LA JOLLA, CA—Ever since discovering a decade ago that a gene altered in lung cancer regulated an enzyme used in therapies against diabetes, Reuben Shaw has wondered if drugs originally designed to treat metabolic diseases could also work against cancer.

The growing evidence that cancer and metabolism are connected, emerging from a number of laboratories around the world over the past 10 years, has further fueled these hopes, though scientists are still working to identify what tumors might be most responsive and which drugs most useful.

Now, in a new study in the journal Cancer Cell, Shaw and a team of scientists at the Salk Institute for Biological Studies found that phenformin, a derivative of the widely-used diabetes drug metformin, decreased the size of lung tumors in mice and increased the animals’ survival. The findings may give hope to the nearly 30 percent of patients with non-small cell lung cancer (NSCLC) whose tumors lack LKB1 (also called STK11).

The LKB1 gene turns on a metabolic enzyme called AMPK when energy levels of ATP, molecules that store the energy we need for just about everything we do, run low in cells. In a previous study, Shaw, an associate professor in Salk’s Molecular and Cell Biology Laboratory and researcher in the Institute’s new Helmsley Center for Genomic Medicine, demonstrated that cells lacking a normal copy of the LKB1 gene fail to activate AMPK in response to low energy levels. LKB1-dependent activation of AMPK serves as a low-energy checkpoint in the cell. Cells that lack LKB1 are unable to sense such metabolic stress and initiate the process to restore their ATP levels following a metabolic change. As a result, these LKB1-mutant cells run out of cellular energy and undergo apoptosis, or programmed cell death, whereas cells with intact LKB1 are alerted to the crisis and re-correct their metabolism. 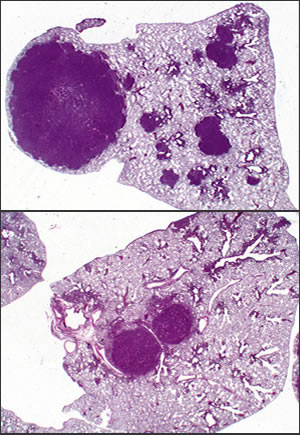 Salk scientists found that the diabetes drug phenformin was effective at reducing tumor size in mice with lung cancer.

The image on the top shows tumors (dark purple) treated with a placebo (top) compared to those treated with phenformin (bottom).

“The driving idea behind the research is knowing that AMPK serves as a sensor for low energy loss in cells and that LKB1-deficient cells lack the ability to activate AMPK and sense energy loss,” says David Shackelford, a postdoctoral researcher at Salk who spearheaded the study in Shaw’s lab and is now an assistant professor at UCLA’s David Geffen School of Medicine.

That led Shaw and his team to a class of drugs called biguanides, which lower cellular energy levels by attacking the power stations of the cell, called mitochondria. Metformin and phenformin both inhibit mitochondria; however, phenformin is nearly 50 times as potent as metformin. In the study, the researchers tested phenformin as a chemotherapy agent in genetically-engineered mice lacking LKB1 and which had advanced stage lung tumors. After three weeks of treatment, Shaw and his team saw a modest reduction in tumor burden in the mice.

Continuing the study between Salk and UCLA, Shaw and Shackelford coordinated teams in both locations to perform further testing on mice with earlier stage disease, using cutting-edge imaging technologies just like those used on lung cancer patients in the clinic. They found that early phenformin treatment causes increased survival and slower tumor progression in tumors lacking LKB1, but had no significant benefit for tumors with alterations in other lung cancer genes. This specificity in treatment fits with an emerging approach in cancer treatment nationwide, known as personalized medicine, in which the therapies for each patient are selected based on the genes altered in their tumors.

“This study is a proof-of-principle that drugs of this chemical type cause energy stress and lower ATP levels to where it kills LKB1-deficient cells without damaging normal, healthy cells,” says Shaw, senior author of the study.

The Food and Drug Administration took phenformin off the market in 1978 due to a high risk of lactic acid buildup in patients with compromised kidney function, which is not uncommon among diabetics but less of an issue for most cancer patients. The issue of kidney toxicity would also be bypassed in cancer patients because the course of treatment is much shorter, measured in weeks to months compared to years of treatment for diabetes patients.

The next step is to determine if phenformin alone would be a sufficient therapy for certain subsets of NSCLC or if the drug would perform better in combination with existing cancer drugs. Based on their findings, the researchers say that phenformin would be most useful in treating early-stage LKB1-mutant NSCLC, as an adjuvant therapy following surgical removal of a tumor, or in combination with other therapeutics for advanced tumors.

“The good news,” says Shackelford, “is that our work provides a basis to initiate human studies. If we can organize enough clinicians who believe in investigating phenformin-and many do-then phenformin as an anti-cancer agent could be a reality in the next several years.”

Other researchers on the study were Laurie Gerken, Debbie S. Vasquez, and Mathias Leblanc of the Salk Institute, and Evan Abt, Atsuko Seki, Liu Wei, Michael C. Fishbein, Johannes Czernin, and Paul S. Mischel, of the David Geffen School of Medicine at the University of California, Los Angeles.

The work was supported by the Salk Institute’s Dulbecco Center for Cancer Research, the Adler Family Foundation, the Ahmanson Translational Imaging Division at UCLA, the National Center for Advancing Translational Sciences, the National Institutes of Health, the American Cancer Society, the Samuel Waxman Cancer Research Foundation, the Howard Hughes Medical Institute and the Leona M. and Harry B. Helmsley Charitable Trust.