Critical pathway in cell cycle may lead to cancer development

Critical pathway in cell cycle may lead to cancer development

LA JOLLA,CA—A team of scientists at the Salk Institute for Biological Studies has identified why disruption of a vital pathway in cell cycle control leads to the proliferation of cancer cells. Their findings on telomeres, the stretches of DNA at the ends of chromosomes that protect our genetic code and make it possible for cells to divide, suggest a potential target for preventive measures against cancer, aging and other diseases. The findings were published July 11, 2013 in Molecular Cell.

Telomeres have been compared to the plastic tips at the end of shoelaces because they prevent the ends of chromosomes from fraying and sticking to each other, which scrambles the genetic information and may promote cancer. They are crucial to DNA replication, tumor suppression and aging. Each time a human cell divides, its telomeres become shorter. When they become too short, the cell can no longer divide and becomes inactive, or “senescent,” or dies. Cells can escape this fate by activating an enzyme called telomerase, which prevents telomeres from getting shorter and allows the cells to continue to grow and divide. Uncontrolled cellular growth is a primary hallmark of cancer cells, and shortened telomeres have been identified in pancreatic, bone, prostate, bladder, lung, kidney and head and neck cancers.

“As telomeres shorten during normal [cellular] aging, they activate a DNA damage response to arrest cell growth, which protects our DNA from harm,” says senior study author Jan Karlseder, a professor in Salk’s Molecular and Cell Biology Laboratory and holder of the Donald and Darlene Shiley Chair.

Karlseder and his team identified that cell growth arrest due to shortening telomeres is confined to one specific portion of the cell cycle, called the G1 phase, which is the most protected stage of the cell cycle. “The pathway controlling G1-phase growth arrest, however, is commonly altered in cancer cells, allowing cancer cells to divide despite shortened telomeres, which can lead to the genomic instability seen in malignant cells.” 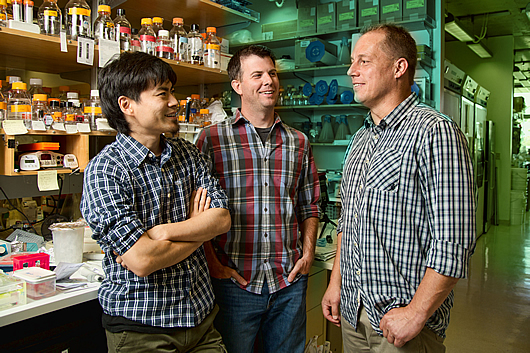 In the study, Karlseder and his colleagues mimicked the process of cellular aging by partially removing a protein called TRF2 from the telomeres of human fibrosarcoma (a type of cancer that affects connective tissue) cells. By doing so, they were able to experimentally reproduce the process that occurs naturally as cells age. This telomere “deprotection” exposed the ends of chromosomes during certain stages of the cell cycle. In this state, they found that telomeres exhibited a partial DNA damage response: the ends of chromosomes were protected against fusing and fraying, but cell growth was still arrested.

The Salk scientists identified the p53 pathway, a molecular mechanism that normally protects a cell’s genetic material and suppresses tumors, as the key player in the response to telomere deprotection. When cells lose the function of p53, the gene at the center of the pathway, they can no longer arrest cells in the G1 phase, an important point in the cell cycle for repairing DNA damage or, if the damage cannot be repaired, targeting the cell for programmed death. Most commonly, p53 is lost in cancer cells due to a mutation in the p53 gene or the inactivation of p53 protein function through infection from cancer-causing viruses.

Because telomere deprotection results in a partial DNA damage response that only arrests cells in G1 through the p53 pathway, once cells lose p53 function telomere deprotection no longer arrests growth. “Cells without functional p53 are able to divide with deprotected telomeres, which causes genomic instability, a common feature of malignant cells,” says Karlseder.

Karlseder and his colleagues believe that better understanding the telomere shortening process may lead to the ability to influence cellular aging and, as a result, stunt cancer cell growth. They say the next step is determining why this deprotection response is muted in cancer cells, and possibly affecting this process to prevent cancer cells from growing.

Other researchers on the study were Makoto T. Hayashi and Laure Crabbe of the Salk Institute. The work was supported by the National Institutes of Health, the John Sabo Trust, the Highland Street Foundation, the Human Frontier Science Program, the Japan Society for the Promotion of Science and the Salk Institute Glenn Center for Aging.