The gift, the single largest to the Salk Institute’s endowment, will help Salk researchers to advance science and to discover the next generation of breakthrough medical therapies.

In honor of Prebys’ generosity, the Salk Institute auditorium, which regularly hosts talks by some of the most prominent scientists in the world, will be named the Conrad T. Prebys Auditorium. 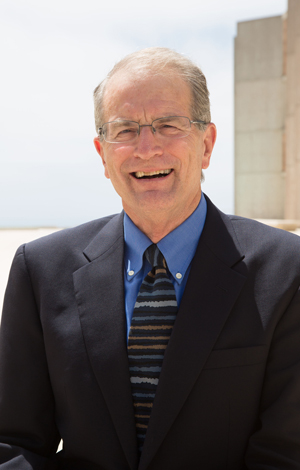 “The scientists at Salk are diving deep into understanding how our bodies operate at the molecular level and what happens when we get sick,” says Prebys, a prominent real estate developer and stalwart supporter of San Diego institutions. “It is vital work that must be done before we can really conquer disease. We need this foundational science to lay the underpinnings for new therapies and cures. I’m honored to play a role in supporting this important research.”

A native of South Bend, Indiana, Prebys was raised in a neighborhood where most of the residents worked in local factories. Encouraged by an inspirational teacher, he was the first of five brothers to graduate from a university. He went on to found Progress Construction Company, a developer of real estate enterprises in California and Texas.

When he was a child, Prebys’ brother contracted polio and he saw the power of scientific research to cure disease when Jonas Salk developed the first polio vaccine.

The Campaign for Salk launched publically in January 2012 with the goal of raising $300 million by July 2015. Prebys’ gift brings the total raised so far by the campaign to $275 million.

“Mr. Prebys is renowned for his remarkable generosity and his vision in boosting San Diego by supporting its pillar institutions,” says Salk President Dr. William Brody. “His gift to Salk’s unrestricted endowment provides the financial flexibility for Salk to adapt and thrive as technology, science and human needs evolve, leaving a lasting legacy.”

The gift will allow the Institute’s researchers to take advantage of new technologies and scientific approaches that are rewriting the rules of biomedical research. In addition, the funds will enable Salk to recruit top scientists and will provide leverage for seeking other crucial sources of funding, such as federal science grants, by demonstrating a sound financial basis to support the best science.