LA JOLLA–As part of a $120 million, 5-year initiative to understand the cell’s nucleus, the National Institutes of Health (NIH) has awarded more than $30 million to San Diego researchers, including the Salk Institute and the University of California, San Diego (UC San Diego). Salk Associate Professor Clodagh O’Shea has been awarded a grant of $3 million over 5 years, along with the possibility of tapping into an additional opportunity pool of $3 million each year for the period. 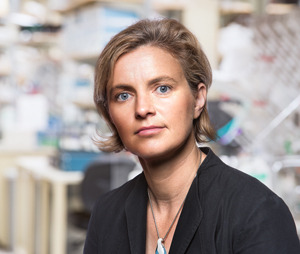 The national effort, called the 4D Nucleome Program, is a collaborative research project consisting of six related initiatives, encompassing 29 awards to 24 institutions in the United States. By bringing together physicists, engineers, biologists, bioinformaticians, clinicians and others to develop new techniques, the program will enable researchers to develop novel technologies, resources and data to understand the genetic architecture of the nucleus, as well as how aberrations contribute to human health and disease.

Although the human genome has been decoded, how DNA–along with proteins that turn genes on and off–is packed in space and time is still a mystery. Human DNA in a single cell is about 6 feet long and folds with proteins into intricate packages (chromatin) to fit within a nucleus.

This spatial configuration is one that has confounded scientists but holds the clues to preventing, diagnosing and treating diseases, like cancer. Up until now, all imagery of DNA is extracted from the nucleus, so the structure within an actual living cell is lost. But advances in imaging and sequencing technologies may, for the first time, allow researchers to visualize and measure what goes on in these complex, microscopic spaces.

“The higher-order coding structures of the human genome have not been visualized within an intact cell and remains one of the most intractable challenges in biology,” says O’Shea, holder of Salk’s William Scandling Developmental Chair. “Although we know the sequence of the human genome, we have yet to learn the physical program of how our genetic code is used.”

O’Shea and her collaborator, Mark Ellisman (professor and director of the Center for Research on Biological Systems at UC San Diego and a Salk adjunct professor), have already made cutting-edge advances in this work by developing a technique to essentially “paint” the surface of DNA with a metal so that its local structure and 3D polymer organization can be visualized for the first time in intact cells and tissues. This technique exploits a dye that enhances the contrast of DNA with a metal and rotates a cell in an electron beam to create a 3D reconstruction of the human genome at unprecedented resolutions and scales –almost like a “CT scan” of the human genome. The next step is to visualize how viral and cellular protein complexes remodel chromatin in the nucleus to modulate gene activity and outcomes in health, infection, cancer and aging.

“By visualizing live, dynamic interactions in real-time, we’ll glean a better understanding of gene activity,” says O’Shea. “We will also determine how chromatin structure and organization is subverted by viral infection and cancer-related proteins to drive pathological replication.”

As co-principal investigators of the new grant, O’Shea and Ellisman will combine molecular and synthetic biology, genome editing, state-of-the-art models of cancer and infection, chemistry, probe development and multi-modal imaging to show how chromatin structure changes from active to silent states in health, infection, aging and cancer. They will create new genetically encoded fluorescent and metal probes that function as beacons to mark and colorize specific genes and the interactions of proteins that determine DNA’s functions in the cell nucleus. The analysis and storage of these visual genome atlases will be facilitated and enabled by the award of a $20 million grant to UC San Diego to house and develop the program’s computational and organizational hub. The team also plans to go beyond broadly imaging DNA and proteins to specifically hone in on individual genes.

“Even though we know the code of a particular gene, we don’t know how its structure and interactions in the nucleus can lead it to be turned off in certain cases, for example cancer, or on when a cell prematurely ages. That on/off status depends on its interactions with other proteins and its actual structure in the cell nucleus, which changes,” says O’Shea. “To see this, we need new probes that lead us to a particular gene and find that needle in a haystack and then reveal its structure.”

With this award, O’Shea is also developing probes that would do just that: genetically encoded metal nanoparticles will act as molecular beacons to light up and mark genes of interest within the maze of DNA. This will allow researchers to see, for the first time, the structure of a gene within the intact nucleus.

“These technological innovations and conceptual advances will have exciting applications that impact almost all of biomedical science,” adds O’Shea. “This program will fund critical infrastructure, innovation and computational support for the data integration, visualization and analysis needed for interpreting the first visual atlases of the genome.”

NIH funding beyond fiscal year 2015 is subject to change based on Congressional appropriations.