LA JOLLA, CA—For humans to grow and to replace and heal damaged tissues, the body’s cells must continually reproduce, a process known as “cell division,” by which one cell becomes two, two become four, and so on. A key question of biomedical research is how chromosomes, which are duplicated during cell division so that each daughter cell receives an exact copy of a person’s genome, are arranged during this process.

Now, scientists at the Salk Institute have discovered a new characteristic of human cell division that may help explain how our DNA is organized in the nucleus as cells reproduce. They found that telomeres, molecular caps that protect the ends of the chromosomes, move to the outer edge of the cell’s nucleus after they have been duplicated. 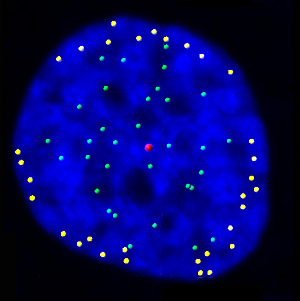 This image shows telomeres (yellow), protective caps on the ends of chromosomes, moving to the outer edge of a cell’s nucleus (blue). Salk researchers found that the telomeres anchor to the nuclear envelope after the cell duplicates its DNA during division, which may help organize the chromosomes as the cell splits into two daughter cells.

While the implications of this spatial reorganization of telomeres are not yet clear, the findings may shed light on how our genes are regulated and how gene expression programs are altered during cell division, an important step in understanding aging and diseases that stem from genetic mutations, such as cancer.

“What we discovered is that telomeres not only protect our chromosomes, they also help organize our genetic material in the nucleus,” says Jan Karlseder, a professor in Salk’s Molecular and Cell Biology Laboratory and the Donald and Darlene Shiley Chair. “This is important, because the three-dimensional position of DNA in the nucleus influences gene expression profiles and how the genome morphs over time.”

Telomeres, a combination of proteins and DNA, are crucial in DNA replication, tumor suppression and aging. Every time a primary human cell divides, its telomeres get shorter, until critically short telomeres lead cells to self-destruct. Much of Karlseder’s research has focused on understanding telomere dynamics in order to develop ways to influence the aging process, and as a result, restrict cancer cell growth.

In addition to exploring the involvement of telomeres in premature aging diseases and interactions between the DNA damage machinery and telomeres, Karlseder studies the role of telomeres during the cell cycle. Previous studies on human cells have shown that telomeres change positions during cell division, suggesting they might also play a role in organizing DNA in the nucleus. But these studies provided only isolated snapshots of telomeres at various stages of the cell cycle.

In their new study, the Salk researchers used advanced time-lapse live-cell confocal microscopy to track telomere movement in real time throughout the cell cycle. They followed the telomeres for 20 hours in living cells by labeling them with molecules that glowed under the microscope. They also recorded the movement of chromatin, a combination of DNA and proteins that forms chromosomes.

“The tethering of telomeres to the nuclear envelope may serve as an anchor point to reorganize chromatin after each cell division, so that our DNA is correctly situated for gene expression,” Karlseder says. “This tethering could also play a role in the maintenance of telomeres, thereby influencing aging, cancer development and other disorders associated with DNA damage. We plan to explore these possibilities in future experiments.”

The research was supported by the Glenn Foundation For Medical Research, the National Institutes of Health (Grant 5T32CA009370-29), the Robert John Sabo Trust and the Highland Street Foundation.