LA JOLLA–As food demands rise to unprecedented levels, farmers are in a race against time to grow plants that can withstand environmental challenges–infestation, climate change and more. Now, new research at the Salk Institute, published in Science on October 23, 2015, reveals details into a fundamental mechanism of how plants manage their energy intake, which could potentially be harnessed to improve yield.

“Plants are unique in that they are stuck wherever they germinate, so they must use a variety of ways to deal with environmental challenges,” says Joanne Chory, senior author of the paper and director of Salk’s Plant Molecular and Cellular Biology Laboratory. “Understanding the techniques plants use to cope with stress can help us to engineer stronger crops with improved yield to face our growing food shortage.”

Plants have cellular organelles akin to tiny solar panels in each leaf. These microscopic structures, called chloroplasts, convert sunlight into chemical energy to enable the plant to grow. The command center of the cell, the nucleus, occasionally sends out signals to destroy all of the 50-100 chloroplasts in the cell, such as in autumn when leaves turn brown and drop off. However, the Salk team found how the plant nucleus begins to degrade and reuse the materials of select, malfunctioning chloroplasts–a mechanism that had been suspected but never shown until now. 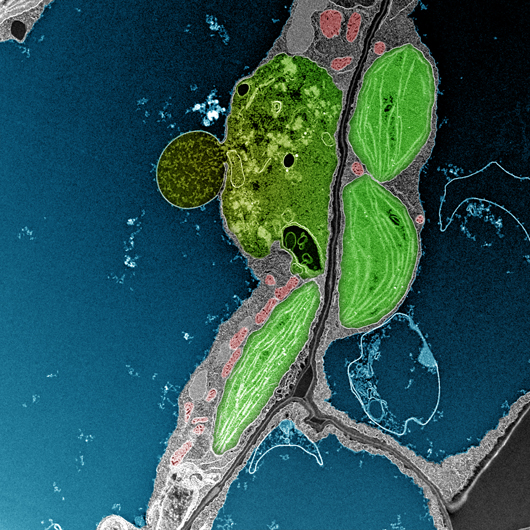 In plants, chloroplasts can accumulate high levels of toxic singlet oxygen, a reactive oxygen species formed during photosynthesis. In these cells, most of the chloroplasts (green organelles) and mitochondria (red organelles) appear healthy. However, the chloroplast in the top left of the image is being selectively degraded and is interacting with the central vacuole (blue).

“We’ve discovered a new pathway that lets a cell do a quality control check on the chloroplasts,” says Jesse Woodson, Salk staff scientist and first author of the paper. Chloroplasts are full of enzymes, proteins and other materials that the plant can otherwise use if the chloroplast is defective (for example, creating toxic materials) or not needed.

While studying a mutant version of the model plant Arabidopsis, the team noticed the plant was making defective chloroplasts that created a reactive, toxic molecule called singlet oxygen that accumulated in the cells. The team noticed that the cells were marking the damaged chloroplasts for degradation with a protein tag called ubiquitin, which is used in organisms from yeast to humans to modify the function of a protein. Under closer investigation, the team observed that a protein called PUB4 was initiating the tagging.

“Damaged chloroplasts were being coated in this ubiquitin protein,” says Woodson. “We think this is fundamentally different than the cell-wide signal, because the cell wants to continue doing photosynthesis, but has some bad chloroplasts to target and remove.” 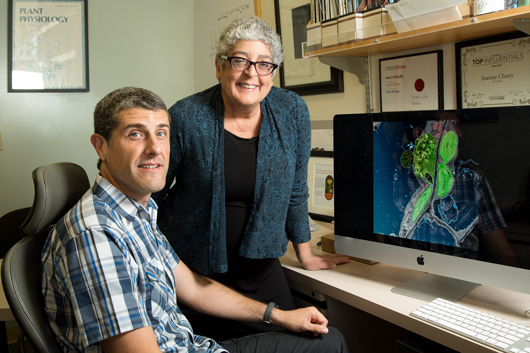 While PUB4 had been tied to cell death in other work, the Salk team showed that this protein initiates the degradation of chloroplasts by placing ubiquitin tags to mark the organelle for cellular recycling. This process, says Woodson, is like labeling defective solar panels to break them down for other materials.

“Understanding the basic biology of plants like this selective chloroplast degradation leads us a step closer to learning how to control chloroplasts and design crops that are more resistant to stressors,” says Chory, who is also a Howard Hughes Medical Institute investigator and holder of the Howard H. and Maryam R. Newman Chair in Plant Biology. For example, if a plant is growing in an environment that is fairly relaxed, one could potentially reduce the degradation of chloroplasts to boost the growth of the plant. Or, if the environment contained a lot of sun, spurring on the breakdown and regeneration of chloroplasts could help the plant thrive.

Interestingly, chloroplasts could help us understand our brains as well. Neurons have energy-generating organelles similar to chloroplasts called mitochondria. “Recently it’s become apparent that mitochondria are selectively degraded in the cell and that bad mitochondria accumulation could lead to disease like Parkinson’s and maybe Alzheimer’s,” says Woodson. “Cells, whether plant or animal, learn how to degrade defunct energy organelles selectively to survive.”

By better understanding this process in chloroplasts, the Salk team may be able to also glean insight into how the cells handle misbehaving mitochondria. “So far it seems like it might be a parallel process,” Woodson adds. “We’re hoping with our molecular and genetic tools available for plants we can continue to uncover general concepts on how cells do these quality control checks on organelles and learn something about neurodegenerative disease as well.”

Other authors of this work include Matthew S. Joens, Andrew B. Sinson, Jonathan Gilkerson and James A. Fitzpatrick of the Salk Institute, and Patrice A. Salomé and Detlef Weigel of the Max Planck Institute for Developmental Biology.

The research was supported by the U.S. Department of Energy, the Howard Hughes Medical Institute and Howard H. and Maryam R. Newman.