Can your sense of smell predict when you'll die?

Home - Salk News - Can your sense of smell predict when you’ll die?

Can your sense of smell predict when you’ll die?

LA JOLLA–By measuring how worms move toward an appealing, food-like scent, researchers at the Salk Institute were able to predict whether the worms would be long-lived. The finding, published September 22, 2015 in the journal eLife, shows how nematodes (Caenorhabditis elegans) process information about the environment and how circuits in the brain change as an animal ages.

“We’re not saying that your ability to smell is going to make you live longer,” says Sreekanth Chalasani, an assistant professor in Salk’s Molecular Neurobiology Laboratory. “But this odor behavior is likely indicative of some kind of underlying physiology.”

The small C. elegans has 12 pairs of specialized neurons in its brain that detect stimuli in the environment. Scientists had previously identified individual pairs of these neurons as required for the animals to respond to attractive odors. Chalasani and his colleagues wanted to understand this entire process in more detail. In their new work, the researchers measured the responses of all 24 neurons as C. elegans was exposed to benzaldehyde–a chemical that gives off a pleasant, almond-like smell. Surprisingly, rather than the individual pairs that had been previously shown, they found that additional neurons were also involved. 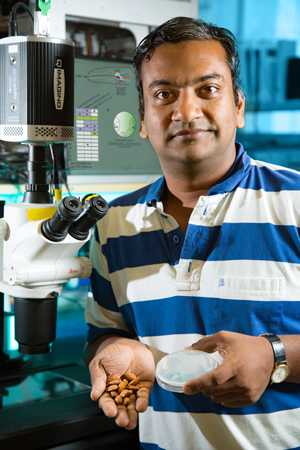 Sreekanth Chalasani, a Salk assistant professor, measured the neural responses of worms exposed to a chemical that gives off an almond-like smell. By measuring how fast the worms moved toward the food-like scent, researchers able to predict whether the worms would be long-lived.

Interestingly, these cells were divided into primary and secondary neurons. Primary neurons showed activity in response to the benzaldehyde, while secondary neurons responded to signals sent by the primary neurons. By having a neural circuit structured like this, the team hypothesizes, the worm can get better information on the strength or concentration of a smell.

“If you have multiple different cells that are all detecting a stimulus, you can use the combination of them to get more dynamic information,” says Sarah Leinwand, a graduate student in the Chalasani lab and first author of the new paper. “Using this strategy allows an animal to generate flexible behavioral responses to its environment.” For instance, some behaviors could only be triggered when a smell is strong enough to cause activity in particular combinations of neurons. The researchers speculate that other species with larger brains may use similarly structured neural circuits to represent sensory information and fine-tune their behaviors.

Since they knew that worms (like other animals and people) often begin to lose their sense of smell with age, Chalasani and Leinwand next measured how the circuit composed of primary and secondary neurons changes as C. elegans gets older. While the primary neurons don’t show a decline in activity, they found, secondary neurons become less active with age. This suggests that communication between neurons could be degraded as animals age, Chalasani says, a phenomenon which might also hold true in other neural circuits in many different species. The scientists went on to show a correlation between poor performance on a smell-based test (moving toward a point source of benzaldehyde), the activity of secondary neurons and the animal’s lifespan. Older animals that were more successful in finding the odor lived about 16% longer than animals that were less good at moving toward the smell.

“Even though all these animals are siblings and have similar genomes, if you look at neuron activity, behavioral performance, or lifespan, there are significant differences,” says Chalasani. “Perhaps that’s because some animals have better signaling between primary and secondary cells.”

If the signaling between neurons ends up being important in how other organisms –including humans–age, then manipulating the nervous system may prove a fruitful way to minimize the effects of aging or rejuvenate brain functions, he says.

“There are a lot of questions that remain about what exactly is changing as an animal ages,” says Leinwand. “We want to keep looking at what is changing to cause some animals to have better functioning nervous systems and to live longer.”

Other researchers on the study were Claire Yang of the Salk Institute, Daphne Bazopoulou and Nikos Chronis of the University of Michigan, and Jagan Srinivasan of the Worcester Polytechnic Institute.