Can you hear me now?

Can you hear me now?

La Jolla, CA – When it comes to cellular communication networks, a primitive single-celled microbe that answers to the name of Monosiga brevicollis has a leg up on animals composed of billions of cells. It commands a signaling network more elaborate and diverse than found in any multicellular organism higher up on the evolutionary tree, researchers at the Salk Institute for Biological Studies have discovered.

Their study, which will be published during the week of July 7-11 in the online edition of the Proceedings of the National Academy of Science, unearthed the remarkable count of 128 tyrosine kinase genes, 38 more than found in humans. 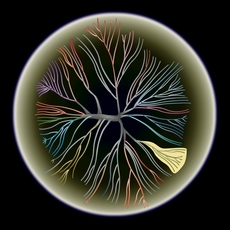 The phylogenetic tree, which shows the evolutionary relationship between all Monosiga tyrosine kinases, reveals that only a handful of them are related to human tyrosine kinases (yellow background).

These kinases transmit essential signals for cell growth, stasis, and death. Though their activity is tightly regulated in normal cells, out-of-control kinases are a major cause of cancer. Many successful cancer drugs – such as Gleevec, which is used for the treatment of leukemia, – specifically target wayward tyrosine kinases.

This treasure trove of diverse and novel tyrosine kinases took the study’s lead author Gerard Manning, who heads the Razavi-Newman Center for Bioinformatics, by surprise since it was long thought that tyrosine kinases are restricted to multicellular animals where they handle communication between cells.

“We were absolutely stunned,” says Manning. “Based on past work, we had expected maybe a handful of these kinases but instead discovered that this primitive organism has a record number of them. Two other essential parts of the tyrosine kinase network – PTP and SH2 genes – are also more numerous than in any other genome, showing that it is the whole network that is elaborated here.”

The 100 trillion cells in our bodies require elaborate communication systems to coordinating their activities. Tyrosine kinases, extremely well-studied enzymes that act as receivers for external cues such as a growth signals and relay their message within cells by attaching tiny phosphate groups to proteins, are a vital part or this communication system.

At first glance, Monosiga brevicollis, which belongs to the group of choanoflagellates – microscopic, aquatic organisms that occupy the grey area between fungal and animal kingdoms – has little in common with multicellular animals that need to co-ordinate the activities of billions of cells. But its distinctive architecture – a collar of tentacle surrounding a whip-like tail known as flagellum – has the same basic structure as “collar cells” that aggregate to form sponges, which are considered the most primitive multicellular organisms or metazoans.

Because of their key evolutionary position, M. brevicollis was selected as a representative choanoflagellate for whole genome sequencing. “Choanoflagellates are like ‘first cousins’ of animals and their genome allows us a glimpse into the evolutionary origin of animals,” says Manning.

The Monosiga kinases are more divergent than anything previously seen in animals, which may help scientists understand the fundamentals of how all tyrosine kinase signaling works. Despite their extreme diversity, Monosiga kinases time and again arrive at the same solution to a problem, as do animal kinases, but using a distinct method for instance to create a sensor structure that emerges from the cell, or to target a kinase to a specific part of the cell. “This convergent evolution suggests that there are only a limited number of ways build a functional network from these components,” says Manning.

With all this new information, one obvious question remains unanswered: what is a single-celled organism doing with all this communications gear? “We don’t have a clue!” says Manning, “but this discovery is the first step in finding out.”

Researchers who also contributed to the work include Yufeng Zhai, Ph.D. from the Salk Institute, Susan L. Young, Ph.D., in the Center for Integrative Genomics at the University of California, Berkeley and W. Todd Miller, Ph. D. in the Department of Physiology and Biophysics at Stony Brook University, Stony Brook.

The work was supported by the NIH and the Razavi Newman Center for Bioinformatics.