La Jolla, CA – A team of biologists from the Salk Institute for Biological Studies, UC San Diego, and Oregon State University has identified the genes that enable plants to undergo bursts of rhythmic growth at night and allow them to compete when their leaves are shaded by other plants.

The researchers report in this week’s issue of the journal PLoS Biology that these genes control the complex interplay of plant growth hormones, plant light sensors and circadian rhythms that permit plants to undergo rhythmic growth spurts at specific times of the day or year in response to varying levels of light and other environmental conditions.

Their discovery of the genetic underpinnings of the rhythmic plant movements that enthralled Charles Darwin more than a century ago, could eventually allow scientists to design crops that can grow substantially faster and produce more food than the most productive varieties today. 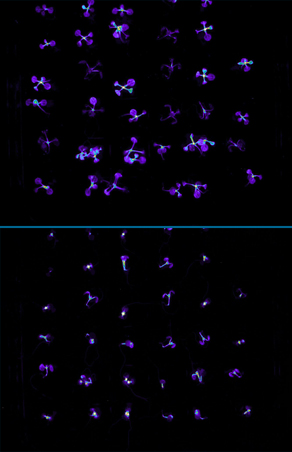 …then fade as the genes turn off in a daily cycle.

“This paper builds on our previous findings that almost all plant genes are expressed only at a particular time of the day,” said Howard Hughes Medical Institute investigator Joanne Chory, Ph.D., a professor in the Salk Institute’s Plant Biology Laboratory, who led the current study.

“What we found is a whole raft of genes that could be the actual molecular switches that define plant growth at the molecular level,” said Steve Kay, Ph.D., Dean of the Division of Biological Sciences at UC San Diego and one of the leaders of the research team. “The more we understand these genetic mechanisms and how they switch on and off plant growth, the better we will be at designing tailor-made crops to increase our production of food and fuel for the world’s rapidly growing population.”

How plants grow to maximize their survival in different environments has long fascinated biologists. In 1880, Charles Darwin published The Power of Movement in Plants, one of his lesser-known books in which he describes his studies on the manner by which different types of plants grow and move in response to various stimuli.

While most people might assume that plants grow at a slow and steady rate throughout the day and night, Darwin and others found that they grow in regular nightly spurts, with plant stems elongating fastest in the hours just before dawn. See video of soybean sprout growth at: http://www.biology.ucsd.edu/scicomm/video/bigbeansprout.mov

“Plants actually grow rhythmically,” said Kay. “Some plants, like sorghum, have the ability to elongate a centimeter or more each night.”

Why plants have evolved mechanisms to grow rhythmically at night or in the hours just before dawn is a mystery. But a similar interplay of light sensing, plant hormones and circadian rhythms that leads to a pronounced rhythmic growth by plants during certain seasons and when shaded by other plants has a clear survival value.

“Any plant that is growing is in a situation in which it has to compete with the plants growing around it, so it has to develop ways in which it can measure its environment to enable it to compete,” said Kay. “Plant cells have phytochromes, which are essentially shade detectors that measure the ratio of different colors of light that can tell a plant whether it’s a cloudy day or whether it’s being shaded by another plant. And being shaded by another plant is bad news, because that plant is devouring all of the right color of light for photosynthesis. If plants detect they’re shaded, they elicit growth hormones to elongate. You can see that in the extreme when you leave something on your lawn and the grass around it has grown taller.”

To determine which genes control these rhythmic patterns of growth, the research team turned to Arabidopsis thaliana, a tiny mustard plant used as a laboratory model by plant geneticists. Because Arabidopsis, like many other plants, grows fastest in the hours before dawn when exposed to day and night cycles of light, the scientists sought to determine which of its genes were being turned on during that period. Using DNA microarray chips, they were able to test thousands of genes at a time to determine which ones were active during that period.

“We did many hundreds of thousands of measurements,” said first-author Todd Michael, Ph.D., a former postdoctoral fellow at Salk who is now an assistant professor of genomics and bioinformatics at the Waksman Institute and Rutgers University, “and then asked what genes are rhythmically being turned on and are correlated with this rhythmic growth pattern just prior to dawn? What we found was that a whole bunch of genes all scattered around the Arabidopsis genome that deal with hormone biosynthesis, hormone signaling and hormone metabolism are all tightly correlated with rhythmic plant growth. This told us that this set of genes could be the actual signature that defines plant growth at the molecular level.”

The scientists said these disparate genes act together to regulate rhythmic plant growth much like a gate with its hinges controlled by photoreceptors and the biological clock-opening in the predawn hours to allow a wave of multiple plant growth hormones to act within the cells, then closing the gate puts the brakes on plant growth until the next 24-hour cycle.

“This temporal integration of hormone pathways allows plants to fine tune phytohormone responses for seasonal and shade-appropriate growth regulation,” they write in their paper. “Many different plant hormone genes, including genes for hormones that promote and antagonize growth, are co-expressed at the time of day that plants grow,” said Chory. “That such an extensive gene regulatory module exists was quite a surprise.”

To illustrate their model, the scientists attached a glowing enzyme, luciferase, to the genes they identified as responsible for rhythmic growth in Arabidopsis plants. As the plants go through their rhythmic growth phase, the Arabidopsis plants glow on and off as genes that regulate the opening and closing of the gate to plant hormones are activated, then deactivated. See video with narration at: http://www.biology.ucsd.edu/scicomm/video/sprouts.mov

The scientists also discovered that most of the genes involved in this rhythmic predawn growth have a DNA sequence in common, a master controller that they dubbed the HUD element-for “Hormone Up at Dawn.” This HUD element, they noted, must have a protein that attaches to it that regulates its function.

“It’s a very exciting time for biologists”, Chory added, “because the tools now exist to answer questions about complex processes, such as how plants grow or how human metabolism goes awry.”

The study was supported by grants from the Howard Hughes Medical Institute, National Institutes of Health and National Science Foundation.