Are genes our destiny?

Are genes our destiny?

LA JOLLA, CA—A “hidden” code linked to the DNA of plants allows them to develop and pass down new biological traits far more rapidly than previously thought, according to the findings of a groundbreaking study by researchers at the Salk Institute for Biological Studies.

The study, published today in the journal Science, provides the first evidence that an organism’s “epigenetic” code – an extra layer of biochemical instructions in DNA – can evolve more quickly than the genetic code and can strongly influence biological traits.

While the study was limited to a single plant species called Arabidopsis thaliana, the equivalent of the laboratory rat of the plant world, the findings hint that the traits of other organisms, including humans, might also be dramatically influenced by biological mechanisms that scientists are just beginning to understand.

“Our study shows that it’s not all in the genes,” said Joseph Ecker, a professor in Salk’s Plant Molecular and Cellular Biology Laboratory, who led the research team. “We found that these plants have an epigenetic code that’s more flexible and influential than we imagined. There is clearly a component of heritability that we don’t fully understand. It’s possible that we humans have a similarly active epigenetic mechanism that controls our biological characteristics and gets passed down to our children. ” 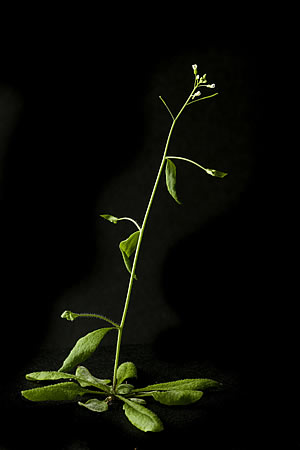 With the advent of techniques for rapidly mapping the DNA of organisms, scientists have found that the genes stored in the four-letter DNA code don’t always determine how an organism develops and responds to its environment. The more biologists map the genomes of various organisms (their entire genetic code), the more they are discovering discrepancies between what the genetic code dictates and how organisms actually look and function.

In fact, many of the major discoveries that led to these conclusions were based upon studies in plants. There are traits such as flower shape and fruit pigmentation in some plants that are under the control of this epigenetic code. Such traits, which defy the predictions of classical Mendelian genetics, are also found in mammals. In some strains of mice, for instance, a tendency for obesity can pass from generation to generation, but no difference between the genetic code of fat mice and thin mice explains this weight difference.

Scientists have even found that identical human twins exhibit different biological traits, despite their matching DNA sequences. They have theorized that such unexplained disparities could be the work of epigenetic variation.

“Since none of these patterns of variation and inheritance match what the genetic sequence says should happen, there is a clearly a component of the ‘genetic’ heritability that is missing,” Ecker said.

Ecker and other scientists have traced these mysterious patterns to chemical markers that serve as a layer of genetic control on top of the DNA sequence. Just as genetic mutations can arise spontaneously and be inherited by subsequent generations, epigenetic mutations can emerge in individuals and spread into the broader population.

Although scientists have identified a number of epigenetic traits, very little was known about how often they arose spontaneously, how quickly they could spread through a population and how significant an influence they could have on biological development and function.

“Perception of the extent of epigenetic variation in plants from generation to generation varies widely within our scientific community,” said Robert Schmitz, a post-doctoral research in Eckers’ laboratory and the lead author on the paper. “We actually did the experiment, and found that overall there is very little change between each generation, but spontaneous epimutations do exist in populations and arise at a rate much higher than the DNA mutation rate, and at times they had a powerful influence over how certain genes were expressed.”

In their study, the Salk researchers and collaborators at Scripps Research Institute mapped the epigenome of a population of Arabidopsis plants then observed how this biochemical landscape had changed after 30 generations. This mapping consisted of recording the state of all locations on the DNA molecule that could undergo a chemical modification known as methylation, a key epigenetic change that can alter how certain underlying genes are expressed. They then watched how methylation states of these sites evolved over the generations. 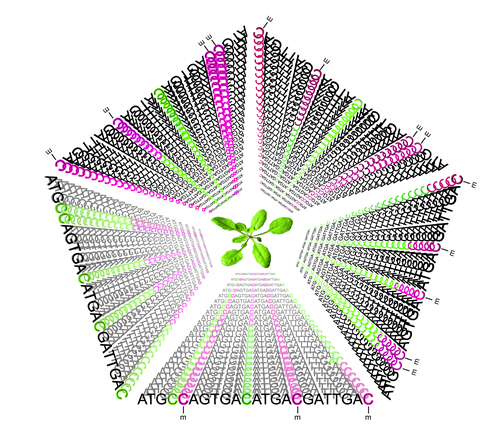 Although spontaneous rates of genetic mutations are well understood, the rates of epigenetic variation in DNA methylation have remained a mystery until now. Using the plant Arabidopsis thaliana (depicted in the center), generational variation in DNA methylation was identified in five lineages separated by 30 generations of growth as indicated by the methylated pink Cs and the unmethylated green Cs.

The plants were all clones of a single ancestor, so their DNA sequences were essentially identical across the generations. Thus any changes in how the plants expressed certain genetic traits were likely to be a result of spontaneous changes in their epigenetic code – variations in the methylation of the DNA sites- not the result of variations in the underlying DNA sequences.

“You couldn’t do this kind of study in humans, because our DNA gets shuffled each generation,” Ecker said. “Unlike people, some plants are easily cloned, so we can see the epigenetic signature without all the genetic noise.”

The researchers discovered that as many as a few thousand methylation sites on the plants’ DNA were altered each generation. Although this represents a small proportion of the potentially six million methylation sites estimated to exist on Arabidopsis DNA, it dwarfs the rate of spontaneous change seen at the DNA sequence level by about five orders of magnitude.

This suggests that the epigenetic code of plants – and other organisms, by extension – is far more fluid than their genetic code.

Even more surprising was the extent to which some of these changes turned genes on or off. A number of plant genes that underwent heritable changes in methylation also experienced substantial alterations in their expression – the process by which genes control cellular function through protein production.

This meant that not only was the epigenome of the plants morphing rapidly despite the absence of any strong environmental pressure, but that these changes could have a powerful influence on the plants’ form and function.

Ecker said the results of the study provide some of the first evidence that the epigenetic code can be rewritten quickly and to dramatic effect. “This means that genes are not destiny,” he said. “If we are anything like these plants, our epigenome may also undergo relatively rapid spontaneous change that could have a powerful influence on our biological traits.”

Now that they have shown the extent to which spontaneous epigenetic mutations occur, the Salk researchers plan to unravel the biochemical mechanisms that allow these changes to arise and get passed from one generation to the next.

They also hope to explore how different environmental conditions, such as differences in temperature, might drive epigenetic change in the plants, or, conversely, whether epigenetic traits provide the plants with more flexibility in coping with environmental change.

“We think these epigenetic events might silence genes when they aren’t needed, then turned them back on when external conditions warrant,” Ecker said. “We won’t know how important these epimutations are until we measure the effect on plant traits, and we’re just now to the point where we can do these experiments. It’s very exciting.”