La Jolla, CA – A team of scientists at the Salk Institute for Biological Studies think they know how many-if not most-living organisms answer this question. They recently showed that when food supplies dwindle, mammals, fruitflies, or frogs probably activate the same ancient cell signaling pathway in order to conserve energy. 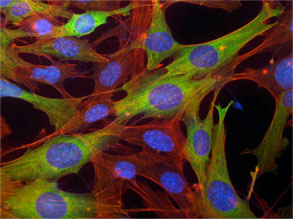 Caption: In response to energy stress, AMPK, which acts like a gas gauge by sensing how much energy a cell has, puts a damper on cell proliferation. It muffles a cellular protein called raptor (shown in green), which keeps starving cells from dividing. Nuclei are shown in blue and actin, which forms an integral part of the cellular architecture, is shown in red.

In a study published in the April 25, 2008 issue of Molecular Cell, investigators led by Reuben Shaw, Ph.D., assistant professor in the Molecular and Cell Biology Laboratory of the Dulbecco Center for Cancer Research, report that when mammalian cells sense that glucose and other nutrients are running short, they muffle a cellular protein called raptor, causing cells to slow their growth.

Not only do these studies reveal survival strategies likely common to complex and simple organisms alike, but they suggest an extremely intriguing link between cancer and diabetes.

“This paper provides the first direct biochemical explanation for how cell growth is inhibited under conditions when nutrients are low,” reports Shaw. “This very simple bio-circuit is literally the bare bones signal that most organisms use to say, ‘We’ve got food!’ “

Researchers knew that when this circuit broke down, cells facing starvation simply continued to divide-oblivious to hard times and spending energy currency like a frenzied credit card shopper-until the cellular cash ran out and cells died. What Shaw wondered was whether all the circuit components had been identified.

Using mouse and human cells, Shaw and colleagues observed that when cells are kept hungry in a culture dish, a watchdog enzyme called AMPK jumps into action and attaches a chemical phosphate group to a target protein named raptor. As a result, raptor, whose job is to cradle a growth-promoting protein called mTOR, is disabled, inactivating mTOR and halting cell division. Cells then safely switch into energy conservation mode until plentiful times return.

Previously, Shaw and others had shown that although AMPK performs a critical growth-slowing function, it takes its orders from a biochemical big boss, the protein LKB1. LKB1 is a so-called tumor-suppressor, meaning that its loss correlates with formation of benign growths, called hamartomas, and some types of malignant lung and colon cancer. Once growth-regulating LKB1 was out of the picture, many of these tumors showed very high levels of unregulated mTOR activity.

That’s where Shaw’s latest investigations began. “We were trying to understand how mutation of the tumor suppressor LKB1 leads to colon cancer or sporadic lung cancer,” he says. “I had shown that LKB1 turns AMPK on, so the next question was, what does that do? If it regulated cancer, there had to be components of the pathway that regulated cell growth that no one had discovered.”

A collaborator, Benjamin Turk, Ph.D., of Yale University School of Medicine, helped Shaw identify that component. AMPK is a kinase, meaning that it adds phosphate groups-which sometimes activate and other times inhibit-to target proteins. Using Turk’s data, Shaw combed through collections of protein fragments biochemically phosphorylated by AMPK and fished out one corresponding to a novel candidate-raptor. Remarkably that tiny part of raptor protein looked similar in raptor proteins expressed in organisms ranging from slime molds to humans.

With raptor as the prime suspect, lead author and graduate student Dana Gwinn and other members of the Shaw lab undertook extensive biochemical studies to demonstrate that AMPK indeed directly phosphorylated raptor in response to energy stress, that mTOR activity then decreased, and that of all this kept starving cells from dividing until they dropped.

The study provides stunning insight into Mother Nature’s reluctance to tinker with strategies that meet organisms’ most basic needs. “Simply the most rudimentary information that any cell needs is to know whether there is food around-that’s what AMPK senses. If there is not, you need to turn off factors that make cells grow,” explains Shaw, specifically to the growth-promoting team of raptor and mTOR.

And as if solving evolutionary puzzles and dissecting tumor suppressor pathways isn’t enough, Shaw’s work overall hints at an even more profound clinical association: the widely used type 2 diabetes drug metformin activates AMPK, suggesting that the LKB1/AMPK pathway is a molecular link between diabetes and cancer. “This circuit could in part explain the increased cancer risk seen in type 2 diabetic patients,” says Shaw, noting many are predisposed to breast, prostate or colon cancer.

Could mutations in components of the LKB1/AMPK pathway underlie both pathologies? And if so, could drugs that effectively antagonize diabetes also antagonize tumor growth?

Those questions are next on Shaw’s agenda. “Not only will we continue to dissect this pathway biochemically, but we will more directly test whether we can treat certain types of tumors in mouse models with diabetes drugs,” Shaw says.