All for one and one for all!

Home - Salk News - All for one and one for all!

All for one and one for all!

LA JOLLA, CA—There is strength in numbers if you want to get your voice heard. But how to do you get your say if you are in the minority? That’s a dilemma faced not only by the citizens of a democracy but also by some neurons in the brain.

Although they only account for a fraction of the synapses in the visual cortex, neurons in the thalamus get their message across loud and clear by coordination — simultaneously hitting the “send” button-according to a computer simulation developed by researchers at the Salk Institute for Biological Studies. 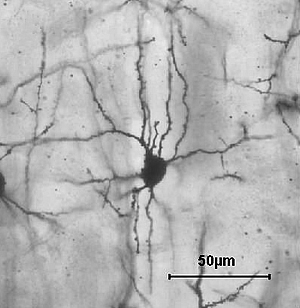 Their findings, published in the April 2, 2010 issue of the journal Science, hold important clues to how the brain encodes and processes information, which can be applied to a wide variety of applications, from understanding psychiatric disorders to the development of novel pharmaceuticals and new ways of handling information by computers or communication networks.

Historically, neuroscientists have been limited to recording the activity of single brain cells, which led to the widely accepted view that neurons communicate with each other through volleys of electrical spikes and that they increase the average rate of spiking to “speak up.”

But communication between neurons is not limited to one-on-one interactions. Instead, any given cell receives signals from hundreds of cells, which send their messages through thousands of synapses, specialized junctions that allow signals to pass from one neuron to the next.

“Unfortunately, we don’t have the technology yet to actually measure what all these neurons are saying to the recipient cell, which would require recording simultaneously from hundreds of cells,” says graduate student and first author Hsi-Ping Wang. “For this reason, nobody could answer a very basic question that’s been puzzling neuroscientist for decades, which is: ‘How many neurons or synapses does it take to reliably send a signal from point A to point B?'”

This question is particularly pressing for the thalamus, the central switchboard that processes and distributes incoming sensory information to all parts of the cortex. Thalamic input only accounts for five percent of the signals that so-called spiny stellate cells in the cortex receive, even though they drive a good portion of activity throughout the cerebral cortex. 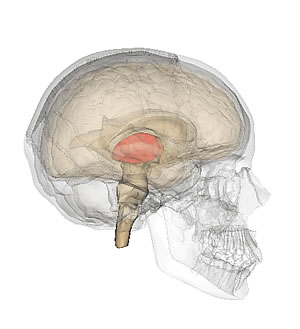 Although they only account for a fraction of the synapses in the visual cortex, neurons in the thalamus (shown in red) get their message across loud and clear by simultaneously hitting the “send” button.

“That is a paradox,” says Howard Hughes Medical Institute investigator Terrence J. Sejnowski, Ph.D., professor and head of the Computational Neurobiology Laboratory. “How can so few synapses have such a big impact? If the average spiking rate were the determining factor, thalamic input would be drowned out by the other 95 percent of the inputs from other cortical cells.”

Based on the assumption that the brain cares about the reliability and precision of spikes, Sejnowki’s team developed a realistic computer model of a spiny stellate cell and the signals it receives through its roughly 6,000 synapses. “We found that it is not the number of spikes that’s relevant but rather how many spikes arrive at the same time,” says Sejnowski.

“Surprisingly, our model predicts that it only takes about 30 synapses out of 6,000 firing simultaneously to create extremely reliable signaling,” explains Wang, “and our prediction lines up with currently available in vivo measurements and understanding. You could have all 6,000 synapses firing at the same time, but it would be a waste of resources.”

The researchers hope that their findings will give them new insight into the holy grail of neurobiology: decoding the neural code or language of the brain. If the eye receives the same visual information under identical conditions over and over again, one would expect that the signal, the series of generated spikes or bits, is essentially the same.

“But it’s not known whether that happens under natural conditions, and it’s technically very difficult to measure,” says senior researcher and co-author Donald Spencer, Ph.D. “That’s where the power of computational neurobiology really comes to bear on otherwise intractable questions.”

“Applying theories of engineering to the study of the brain has helped us gain new insight into how neurons communicate with each other,” says Wang. “On the other hand, there are certain things that the brain does in unique ways that are completely different from how computers work. A better understanding of the brain allows us the capture these algorithms and could very well affect the things engineers do in everyday life.”

Jean-Marc Fellous, an associate professor in the Department of Psychology and Applied Mathematics at the University of Arizona, also contributed to the work.

The work was supported by the Howard Hughes Medical Institute.