LA JOLLA, CA—The Salk Institute for Biological Studies today announced a generous $1.6 million dollar gift from the estate of Henry and Lottie O’Neal of Anchorage, Alaska. Their substantial donation will help continue the pioneering research conducted at the Salk Institute.

Henry and Lottie O’Neal, childhood sweethearts married 51 years, were personally affected by Dr. Jonas Salk’s Polio vaccine when Henry’s nephew, Scott O’Neal, became a victim of the virus at the age of one. Ultimately, Scott lost his arm to the debilitating disease, but it didn’t deter him from achieving his goals. Henry and Lottie witnessed Scott’s remarkable recovery and were deeply moved by the success of their nephew in his battle with Polio. The experience never left Henry or Lottie and inspired their lifelong interest and support in Dr. Salk’s work. 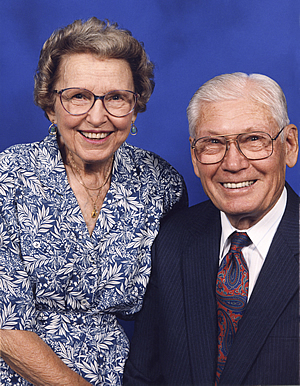 Image: Courtesy of the O’Neal estate

“Henry and Lottie were adventurous, daring, and generous people,” says Norma O’Neal, Henry’s younger sister. “They never had children, but they saw the Salk as a way to support kids around the world. It was an ultimate aim on their part to leave their legacy with the Salk Institute.”

Prior to the O’Neals’ migration north to Alaska, Henry earned his wings in the Second World War where he served as a flight engineer. After the war ended, Henry’s heroism and passion for aviation continued. Among his many acts of bravery, Henry flew the Berlin Airlift 10 times and assisted in the evacuation of 14,000 Yemenite Jews to Israel from Aden under hostile conditions.

The O’Neals, originally from Arkansas, adopted the frontier state as their primary home in 1950 and became active figures in the state’s aviation and real estate development industries. Henry’s post-war career with Alaska Airlines’ reflected his adventurous spirit, culminating in 1951 when he served as the flight engineer on the first commercial flight over the North Pole. Henry retired from Alaska Airlines in 1968. Lottie also enjoyed a colorful and successful career in the healthcare industry, directly supporting and developing seven Native Hospitals in Anchorage. In their spare time, the couple contributed to the Anchorage community by developing homes for Anchorage’s growing population.

“Henry’s heroism and generosity helped to improve the lives of many people impacted by war and catastrophe,” said Salk Institute President William R. Brody. “The Salk’s varied avenues of scientific inquiry cover many disciplines from plant biology to infectious diseases and a multitude of critical areas in between. The breadth and diversity of our biological research here correlates with the continuing challenges faced by humanity. Gifts such as this, enable the mission of the Salk to continue to improve the human condition.”