La Jolla, CA – Suppressing a cellular cleanup-mechanism known as autophagy can accelerate the accumulation of protein aggregates that leads to neural degeneration. In an upcoming issue of Autophagy, scientists at the Salk Institute for Biological Studies report for the first time that the opposite is true as well: Boosting autophagy in the nervous system of fruit flies prevented the age-dependent accumulation of cellular damage in neurons and promoted longevity.

“We discovered that levels of several key pathway members are reduced in Drosophila neural tissue as a normal part of aging,” says senior author Kim Finley, Ph.D., a scientist in the Cellular Neurobiology Laboratory, “which suggests there is an age-dependent suppression of autophagy that may be a contributing factor for human neurodegenerative disorders like Alzheimer’s disease.” 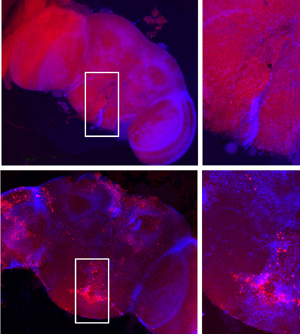 Top: The image shows the brain of a normal, 15-day old fly. Bottom: Damaged proteins tagged for degradation (bright, red stain) start to accumulate in the brains of 15-day old flies in which the process of autophagy has been suppressed. These flies live only half as long as their normal counterparts.

As the American population grows older, questions regarding the aging process and how it can be positively influenced are increasingly becoming the focus of scientific research and public interest. The age-related accumulation of proteins and lipids damaged by chemically aggressive forms of oxygen is considered by most in the geriatrics field to be a normal part of the aging process. As a result in most age-associated diseases, such as Alzheimer’s, damaged proteins accumulate in excessive amounts, which leads to progressive cell death in the brain.

All cells undergo autophagy – literally self-eating, – which requires the assembly of specialized vesicles called autophagosomes. These vesicles surround or engulf damaged cellular proteins or structures and then traffic the “bagged garbage” to a second group of vesicles, which disposes of the trash with the help of digestive enzymes. This process can be enhanced when animals are placed on a calorie-restricted diet, a regime known to extend lifespan.

“The activation of autophagy facilitates the removal of damaged molecules that accumulate during cellular aging,” says Finley. “This may be particularly important in the nervous system since neurons produce damaged molecules at a much higher rate than most cell types.” Keeping cells free of damaged molecules is critical for neurons because unlike many cells, they do not divide or replace themselves once created at birth. “They rely on autophagy together with other clearance and detoxification pathways to keep themselves healthy and functioning for decades,” explains Finley.

For their studies, the Salk researchers turned to the fruit fly Drosophila, a powerful model organism, whose genetics can easily be manipulated. When initial experiments indicated that the expression of several autophagy genes decreased over the normal lifespan of fruit flies, the Salk researchers focused on one particular protein, Atg8a. This protein is an essential component needed for the formation of new autophagosomes. Finley and her team found that levels of Atg8a were significantly reduced by four weeks of age, a time when the flies are considered middle aged. At the same time, protein aggregates were not efficiently cleared by the cellular clean-up crew and started to accumulate.

Without Atg8a, things went from bad to worse. Damaged proteins tagged for degradation started to pile up early and life expectancy plummeted. “The abnormal accumulation of protein aggregates had striking similarities to those seen in the most common human neurodegenerative diseases,” says first author Anne Simonsen, Ph.D., a visiting scientist from the University of Oslo, Norway.

When the researchers kept the neuronal levels of Atg8a high, the genetically engineered flies were spared the ravages of time. Promoting the pathway not only prevented the accumulation of protein aggregates but also significantly extended the average lifespan. “Our experiments show for the first time genetically that autophagy can sequester and eliminate misfolded and damaged proteins, which accumulate in neurons as normal part of the aging process,” says Simonsen, “but most importantly they demonstrate that enhancing the clearance of damaged proteins and protein aggregates increases longevity.”

Insulin signaling and caloric restriction are two major determinants of longevity and they also impact the activity level of autophagy. Therefore, regulating autophagy, the pathway that directly does the cleanup work, may be the key factor in controlling the aging process, the researchers say. “By maintaining the expression of a rate-limiting autophagy gene in the aging nervous system there is a dramatic extension of lifespan and resistance to age-associated oxidative stress,” says Finley.