LA JOLLA—By carefully controlling the levels of two proteins, researchers at the Salk Institute have discovered how to keep mammary stem cells—those that can form breast tissue—alive and functioning in the lab. The new ability to propagate mammary stem cells is allowing them to study both breast development and the formation of breast cancers.

“What we’ve shown is that we can take these cells out of a mouse and study them and regulate them in the laboratory by providing them with a specific factor,” says Peter C. Gray, a staff scientist in Salk’s Clayton Foundation Laboratories for Peptide Biology, who collaborated on the new work with Benjamin T. Spike, a senior research associate in the laboratory of Salk Professor Geoffrey M. Wahl. 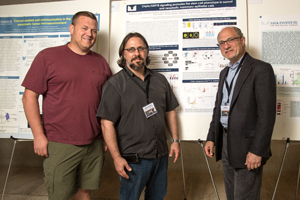 The results of the study were published in the April 8th, 2014 issue of the journal Stem Cell Reports.

Mammary stem cells can give rise to new breast cells during fetal development, adolescence or lactation and may also play a role in breast cancer, so they represent a highly promising avenue for breast cancer research. But isolating the stem cells and maintaining them in the lab to study has been difficult.

“There was a lot of prior work demonstrating that mammary-specific stem cells exist, but it was virtually impossible to isolate them in numbers from an adult,” says Spike. “But we previously found we could turn to early development, when the stem cells are present in higher proportions.”

When the researchers used fetal breast tissue rather than adult tissue from mice, they were able to pinpoint which cells were stem cells but the cells would rapidly change when grown in a dish. A defining property of all stem cells is that when they divide into two new cells, they can form both stem cells and differentiated cells (cells on their way to becoming a specific type of tissue).

Spike and Gray grew the mammary stem cells in culture dishes and stained them so that new stem cells appeared a different color from differentiated mammary cells. Then, they began testing the effects of two proteins—known as CRIPTO and GRP78—that play significant roles in both stem cell biology and embryonic development.

“In normal conditions, we first see the cells as yellow—the combination of red and green within a single cell—then later see cells that are either red or green, showing that our cells had the capacity to make two different types of mature cells,” says Spike. “But then when we do the experiment again and start changing protein levels, the ratio of these cells becomes very different.”

In studies in mice, the scientists also found that CRIPTO helped the animals form new mammary tissues, which led the team to hypothesize that CRIPTO may be produced by nearby cells in the fat to spur the growth of breast tissue.

In a previous study, Gray’s group had discovered that the protein GRP78 binds CRIPTO on the surface of cells and regulates CRIPTO function. This prompted the scientists to test whether GRP78 had an effect on the mammary stem cells. As they suspected, when cells lacked GRP78 on their surfaces, they didn’t respond to CRIPTO.

Both CRIPTO and GRP78 have been implicated in cancers, including breast cancer and lung cancers. Scientists think high levels of either protein could encourage tumor growth using similar pathways that they use to spur breast tissue growth. With the new ability to isolate and sustain mammary stem cells, Spike and Gray hope they can uncover details on exactly what cellular programs CRIPTO and GRP78 activate. Understanding this in stem cells could further understanding on how these proteins are involved in tumor growth. 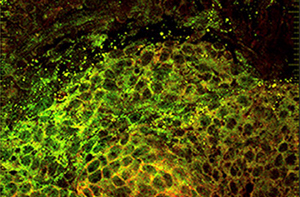 Isolated fetal mammary cells show high levels of CRIPTO (green) and GRP78 (red), which have been found to help control the differentiation of mammary stem cells.

Additionally the researchers think that targeting CRIPTO and GRP78—which are ideal drug targets since they are present outside of cells—could halt or slow cancer growth.
“It’s looking more and more like what’s required to target cancer is to have many therapeutics hitting different pathways,” says Gray. “We think targeting CRIPTO and GRP78 could be a unique way of supplementing existing treatment modalities by targeting stem cell-like cells in cancer.”

Other researchers on the study were Evan Booker, Madhuri Kalathur, Rose Rodewald, Julia Lipianskaya, Justin La, Marielle He and Geoffrey M. Wahl of the Salk Institute for Biological Studies, and Jonathan A. Kelber, Tracy Wright and Richard Klemke of the University of California San Diego