La Jolla, CA – Neurons constituting the optic nerve wire up to the brain in a highly dynamic way. Cell bodies in the developing retina sprout processes, called axons, which extend toward visual centers in the brain, lured by attractive cues and making U-turns when they take the wrong path. How they find targets so accurately is a central question of neuroscience today.

Using the mouse visual system, a team of Salk Institute for Biological Studies investigators led by Dennis O’Leary, Ph.D., identified an unanticipated factor that helps keep retinal axons from going astray. They report in the Sept. 11 issue of Neuron that p75, a protein previously known to regulate whether neurons live or die, leads a double life as an axon guidance protein. 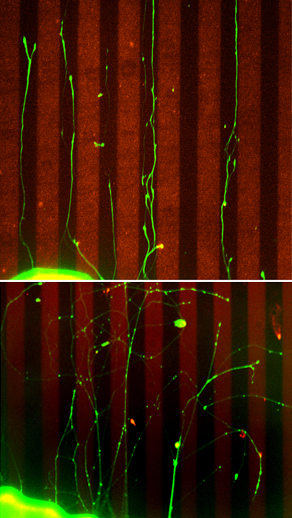 When immature neurons are placed on a microscopic running track, where flanking lanes are carpeted with repellant factors, their growing axons remain in their lanes (top). Neurons from mice lacking p75 are unreceptive to repulsive cues: when placed on the track, their axons meander all over the field, crossing lanes and running down repellant-covered stripes (bottom).

“Historically, we thought that factors that mediate cell survival and those controlling axon guidance were part of two separate processes,” says O’Leary, a professor in the Molecular Neurobiology Laboratory, “But in this study we show a direct interaction between these two systems.”

Collaborating with Kuo-Fen Lee, Ph.D., professor in the Clayton Foundation Laboratories for Peptide Biology, the O’Leary team observed a defect in mice genetically engineered to lack p75. Through their synaptic connections, retinal axons develop a two-dimensional map of the retina in their targets in the brain. In the mice lacking p75, retinal axons stopped short of their final target and formed a map that was shifted forward in the superior colliculus, a major visual center in the brain.

Such a defect in p75-null mice was puzzling: researchers have studied p75 for decades and found it associated with activities as varied as neuronal growth, survival, and degeneration. Axonal migration was not among them.

Todd McLaughlin, Ph.D., a senior research associate in the lab and co-first author, says that insight came in a eureka moment: “We realized that what we were observing in these mice was similar to what would happen if you deleted a gene called ephrin-A from the retina.”

Unlike p75, ephrin-A was a well-characterized sender and receiver of axon guidance signals, but it lacked appendages normally seen on proteins controlling axon migration. p75, however, displayed those elements, suggesting that the proteins could pair up – one receiving the migration signal and the other transmitting it.

The research team then turned to biochemical analyses and with the added expertise of Tsung-Chang Sung, Ph.D., a research associate in Dr. Lee’s lab, obtained evidence that supported this hypothesis. The group found that ephrin-A and p75 complexes in axonal membranes and showed that when activated they could generate the signals required to guide axons and develop their map in the brain.

But the clincher was the “stripe assay,” a classical screen for guidance molecules that repel growing axons. In it, an immature neuron is placed on a microscopic running track, just as it starts to develop an axon. When flanking lanes are carpeted with repellant factors, the sprouting axon bursts from the block but remains in its lane like a well-coached runner, avoiding neighboring tracks.

Constructing tracks made from the repulsive factor sensed by ephrin-A, the researchers confirmed that axons from normal retinal neurons stayed in their lanes when flanked by the repellant. But neurons from mice lacking p75 were unreceptive to repulsive cues: when placed on the track their axons meandered all over the field, crossing lanes and running down repellant-covered stripes.

Why retinal neurons missed the target in the p75-minus mice became clear: they lacked the cellular machinery to respond to critical repellant signals encountered in the brain and stopped migrating prematurely.

Among its myriad functions, p75’s new role is a critical one. “Repulsion is probably the dominant force in axon guidance and a stronger influence than attraction,” explains McLaughlin, noting that providing axons with a lot of options is not the way to build a brain. “Attraction is like finding the best seat in an empty movie theater, but repulsion is like picking the lone empty seat in a full theater.”

“We have shown that ephrin-A cannot transduce an intracellular signal by itself and instead requires the co-receptor p75,” summarizes Yoo-Shick Lim, Ph.D., a postdoctoral fellow in the O’Leary lab and co-first author. “This interaction could operate in numerous events in neural development.”

Findings such as these lend critical insight into how one might repair damage to the nervous system due to genetic defects, tumors or wounds to the brain or spinal cord,” he says. “We hope one day to be able to repair these defects and get cells to form functional connections again.”

Alicia Santiago, Ph.D., formerly of the O’Leary lab, also contributed to the study. Salk professor Tony Hunter and Sourav Ghosh, a former postdoctoral fellow in the Hunter lab, helped with preliminary biochemical experiments. Funding was from a grant from the National Eye Institute and from the Joseph Alexander Foundation.