A place in the sun

Home - Salk News - A place in the sun

A place in the sun

La Jolla, CA – Those spindly plants that desperately try to reach for a break in the canopy formed by larger plants all suffer from the same affliction: Shade avoidance syndrome or SAS. Now, the molecular details of SAS have been brought to light by researchers at the Salk Institute for Biological Studies.

To step out of their neighbors’ shade, plants switch on a natural chemical factory for the synthesis of the plant growth hormone auxin that lets a plant grow and ultimately stretch toward the sun, the Salk researchers report in an article published in the April 4, 2008 issue of the journal Cell. Understanding this response at a molecular level will allow scientists to naturally manipulate this response to increase yield in crops ranging from rice to wheat. 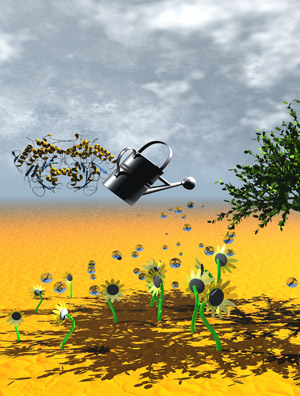 Life in the shade

Plants can tell the difference between the shade of an inanimate object and the shade of another plant. When a plant detects competition from neighboring plants, it initiates a set of responses, called collectively the shade avoidance syndrome, that alter its growth and physiology. A rapid and transient increase of newly synthesized auxin via a newly discovered auxin synthesis pathway allows plants to elongate and grow toward the sun.

“Plants compete with each other for light, and shade avoidance syndrome has a big ecological and economic impact, especially in the high density plantings typical of modern agriculture,” says Howard Hughes Medical Institute investigator Joanne Chory, Ph.D., a professor in the Plant Biology, who led the study. “Suppressing the shade avoidance reaction in crops may allow us to increase biomass and seed yield.”

Plants can sense and respond to the presence of other plants in their neighborhood by the relative increase in incoming far-red light resulting from absorption of red light by canopy leaves and reflection of far-red light from neighboring plants.

To secure their place in the sun, plants direct their growth resources toward stem elongation and away from bulking up harvestable portions such as leaves and seeds. “If all else fails, the plants put out what I like to call a premature ‘desperation flower’ to produce at least a couple of seeds that might find better growing conditions during the next season,” explains Chory.

In an earlier study, Chory had confirmed the existence of a separate molecular pathway that plants use to adjust their growth and flowering time to shade. But the molecular events linking the detection of changes in light quality to changes in growth patterns were still poorly understood.

To identify genes that are involved in the shade avoidance syndrome, first author Yi Tao, a postdoctoral researcher in Chory’s lab, searched a collection of mutated Arabidopsis thaliana seedlings for plants that no longer responded to crowded growth conditions. Like many commercially grown crops, Arabidopsis – the lab rat of plant biologists – doesn’t tolerate shade well.

She identified a handful of genes that play a role in the shade response, one of which encoded an enzyme similar to alliinase, the enzyme that produces the characteristic flavor of onion, garlic and other members of the Alliaceae plant family. To predict the function of the newly identified enzyme, Chory turned to her Salk colleague Howard Hughes Medical Institute investigator Joseph P. Noel, Ph.D, director of the Jack H. Skirball Center for Chemical Biology and Proteomics.

Although Arabidopsis lacks garlic’s pungency, Noel could model the newly discovered enzyme’s structure based on the already-known, three-dimensional structure of alliinase. “The active site chemically resembled a nook and cranny likely to bind the amino acid tryptophan,” says Noel. “That’s when it became really exciting since we knew that plants can use tryptophan to synthesize auxin.”

After virtual biochemistry led the way, real-life biochemistry confirmed that the enzyme indeed uses tryptophan to catalyze the first reaction in a three-step auxin-synthesis pathway and the new enzyme became known as tryptophan aminotransferase of Arabidopsis, or TAA1 for short.

Despite the importance of auxin for plant growth and development, the details of how auxin is synthesized continue to puzzle plant biologists. Multiple biochemical pathways for the production of auxin have been identified or proposed but the specific function of each pathway and how they intersect is not known. Now, the role of at least one pathway has become clearer.

“When the major photoreceptor for shade avoidance detects neighbors, it triggers the TAA1 pathway resulting in a rapid increase in free auxin, which is transported to sites in the stem where it can participate in the growth response,” explains Chory. “Although we showed earlier that at least two additional biosynthetic routes to auxin exist in Arabidopsis, these other pathways are unable to compensate for the loss of the TAA1-dependent pathway.”