A new ending to an old "tail"

A new ending to an old “tail”

LA JOLLA, CA—In stark contrast to normal cells, which only divide a finite number of times before they enter into a permanent state of growth arrest or simply die, cancer cells never cease to proliferate. Now, scientists at the Salk Institute for Biological Studies have uncovered an important clue to one of the mechanisms underlying cancer cell immortality.

Their findings, published in the April 22, 2011 issue of Molecular Cell, reveal an unanticipated structure at chromosome ends, which could be a key ingredient in the biological “elixir of life,” potentially making it an attractive chemotherapeutic target to cut short the life of a cancer cell.

“How tumor cells evade cell death is still baffling to us, but we think we may have solved a small piece of this puzzle,” says Jan Karlseder, Ph.D., a professor in the Molecular and Cell Biology Laboratory, who led the Salk team.

A lynchpin to the immortality of malignant cells is the ability to maintain telomeres, the specialized ends of chromosomes. Like slow-burning fuses, telomeres become shorter each time a cell divides, acting as a kind of cellular clock ticking down a cell’s age. Eventually they are depleted, and the cell enters a permanently arrested state called senescence. To escape this inevitable demise, about 90 percent of human tumors rely on a huge boost in the levels of an enzyme called telomerase, which adds DNA to telomeres, thus turning the clock backwards. 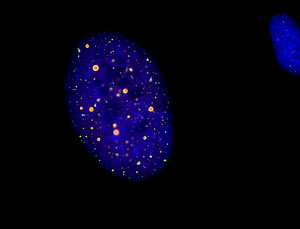 About 10 percent of tumor cells use a mechanism called ALT, short for alternative lengthening of telomeres, to keep their chromosomes ends intact. PML bodies that contain telomeric DNA and associated telomere-binding proteins (shown in orange) are highly characteristic of ALT tumor cells.

The remaining 10 percent use a mechanism known as ALT, short for alternative lengthening of telomeres. “Although it is a rare phenomenon, understanding ALT is essential since tumors can evade anti-cancer therapies aimed at inhibiting the activity of telomerase through the activation of ALT,” explains postdoctoral researcher and first author Liana Oganesian, Ph.D. “This is why we clearly need a two-pronged approached to successfully tackle cancer.”

Unlike telomerase, which tacks on telomeric DNA, ALT replenishes chromosome ends through a process called homologous recombination. In normal cells homologous recombination is used to mend broken DNA, whereby the intact neighboring DNA of an identical sequence is used as a template to restore the sequence of the broken DNA piece. Uniquely, human ALT tumors make use of the same recombination machinery to illicitly restore lost telomeric DNA, but not much is known about this process.

Trying to learn more about the biological tools that ALT tumors use to sustain their immortal status, Karlseder and his team uncovered a new structural beacon, called the C-tail-a string of DNA rich in the base cytosine (C) that hangs over the very tip of telomeres. The finding came as a big surprise since conventional wisdom had it that mammalian cells normally terminate both ends of every chromosome with a single-stranded stretch of DNA rich in the base guanine (G).

When Ogenesian carefully looked at chromosome ends, however, she discovered that about half of all telomeres in ALT tumors bore a C-tail, while the presence of such a tail in normal human cells was several hundred fold less prevalent. “This piece of DNA is conspicuously absent in tumors that use telomerase, suggesting that C-tails are a unique feature of ALT tumors,” she says.

Curiously, there is precedent for chromosomal C-tails in an evolutionarily distant relative, the roundworm. In 2008,
the Karlseder team discovered that G-tails and C-tails happily coexisted in worm cells and went on to show that they team up with two distinct proteins. When the C-tail specific protein was removed from cells, strikingly the worm began to exhibit some of the characteristics normally attributed to human ALT tumors.

“It was really exciting to discover that worms can teach us a thing or two about the mechanisms of human cancer,” says Karlseder and adds that “the challenge now is to determine the precise role of C-tails in tumor cells and to unveil the mechanisms responsible for creating them.”

The work was funded in part by the National Institutes of Health and a Merieux Research Grant by the Institut Merieux.