A new dent in HIV-1's armor

A new dent in HIV-1’s armor

LA JOLLA–Like a slumbering dragon, HIV can lay dormant in a person’s cells for years, evading medical treatments only to wake up and strike at a later time, quickly replicating itself and destroying the immune system.

Scientists at the Salk Institute have uncovered a new protein that participates in active HIV replication, as detailed in the latest issue of Genes & Development. The new protein, called Ssu72, is part of a switch used to awaken HIV-1 (the most common type of HIV) from its slumber.

More than 35 million people worldwide are living with HIV and about a million people die a year due to the disease, according to the World Health Organization. There is no cure, and while regular medication makes the disease manageable, treatment can have severe side effects, is not readily available to everyone and requires a regiment that can be challenging for patients to adhere to.

The team began by identifying a list of 50 or so proteins that interact with a well-known protein HIV creates called Tat.

“The virus cannot live without Tat,” says Katherine Jones, Salk professor in the Regulatory Biology Laboratory and senior author of the study.

Tat acts as a lookout in the cell for the virus, telling the virus when the cellular environment is favorable for its replication. When the environment is right, Tat kicks off the virus’ transcription, the process by which HIV reads and replicates its building blocks (RNA) to spread throughout the body.

One of the proteins on the list that caught Jones’ eye was Ssu72 (a phosphatase). This enzyme had been shown in yeast to affect the transcription machinery. Sure enough, her team found that Ssu72 binds directly to Tat and not only begins the transcription process, but also creates a feedback loop to ramp up the process.

“Tat is like an engine for HIV replication and Ssu72 revs up the engine,” says Lirong Zhang, one of the first authors and a Salk researcher. “If we target this interaction between Ssu72 and Tat, we may be able to stop the replication of HIV.”

The findings were surprising to the team because Tat, a relatively small protein, was previously thought to have a simpler role. Jones’ lab previously discovered the CycT1 protein, another critical protein that Tat uses to begin the steps of replicating the virus. “After all these years, we thought that Tat only had this one partner (CycT1), but when we looked at it a bit harder, we found that it also binds and stimulates the Ssu72 phosphatase, which controls an immediately preceding step to switch on HIV,” she said. 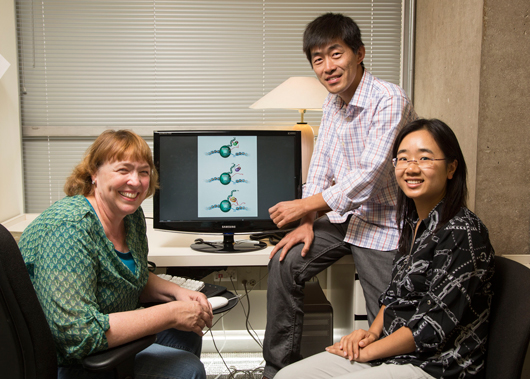 CycT1 is needed for normal cell function, so it may not be an ideal anti-viral target. However, the team found that Ssu72 is not required for making RNA for most host cell genes in the way it is used by HIV, making it a potentially promising target for drug therapy.

“Many proteins that Tat interacts with are essential for normal cellular transcription so those can’t be targeted unless you want to kill normal cells,” says co-first author Yupeng Chen, a Salk researcher. “Ssu72 seems to be different–at least in the way it is used by HIV.”

Now that the team knows the protein is specifically required for HIV transcription, they next plan to investigate how they can target the protein, for example by inhibiting Ssu72’s ability kick off the transcription process. They are also examining whether latent HIV infections result from low levels of Ssu72 in resting T cells. And stay tuned: the lab is excited about checking other new host cell partners of Tat that were identified in this study.

Funding for the work was provided by the National Institutes of Health, the National
Center for Research Resources, the Blasker-Rose-Miah Fund and the Margaret T. Morris Foundation.