LA JOLLA–Mice that have a genetic version of mitochondrial disease can easily be mistaken for much older animals by the time they are nine months old: they have thinning grey hair, osteoporosis, poor hearing, infertility, heart problems and have lost weight. Despite having this disease at birth, these mice have a “secret weapon” in their youth that staves off signs of aging for a time.

New research from the Salk Institute reveals how a longevity hormone helps these mice–born with thousands of mutations in their energy-generating mitochondria–maintain metabolic homeostasis at a young age. This work provides insight into potential new therapies for mitochondrial and metabolic diseases in humans.

“These findings help us understand the link between diet, health and aging, and they give us the potential to dissect these connections in a molecular way that could lead to therapeutics,” says Ronald Evans, director of Salk’s Gene Expression Laboratory and senior author of the new paper, published June 29, 2015 in Proceedings of the National Academy of Sciences.

When Evans and collaborators studied these mice, they found that the longevity-promoting endocrine hormone FGF21 was highly active, even though these mice display hallmarks of accelerated aging.

“FGF21 is classically thought of as an anti-aging gene, turned on by exercise or fasting and suspected to extend lifespan,” says Christopher Wall, a graduate student in the Evans lab at the time of the study and first author of the new paper. “Yet these mice ultimately age prematurely, despite having high levels of this hormone.”

To explain this paradox, the team found that FGF21 actually assists stressed mitochondria and reprograms the metabolic state of these mice. In the paper, Evans and collaborators describe how FGF21 appears to switch tissues with important metabolic functions from burning sugar to burning fat–which is easier fuel for the dysfunctional mitochondria to process. 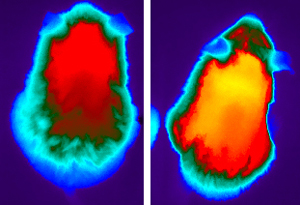 “This works for a while in these mice, but eventually their bodies run out of fat to burn,” says Michael Downes, a senior staff scientist at Salk involved in the new study. “FGF21 needs some additional fat from the diet to keep working.” The team also found that feeding the mice a high-fat diet amplifies the effects of FGF21, granting them complete resistance to diet-induced obesity and many of its associated diseases.

“What we believe now is that turning on FGF21 is an adaptation to help this animal maintain its metabolic health,” says Evans, a Howard Hughes Medical Institute investigator and the March of Dimes Chair in Molecular and Developmental Biology. “If the mice didn’t have this hormonal ‘fountain of youth,’ they might age even more quickly than they already do.”

The new observation has the potential to impact human health in multiple ways, says Evans. Elevated FGF21 levels have previously been observed in people with mitochondrial diseases, so increasing dietary fat intake could potentially ease their symptoms by helping the hormone reduce the strain on the mitochondria. At the same time, these findings suggest that using drugs to mildly stress mitochondria could activate a beneficial FGF21-dependent metabolic shift in patients suffering from obesity and other metabolic diseases.

“We want to look at the interaction between FGF21 and dietary fat in human patients with mitochondrial disease now,” says Downes, “and start to see how we can manipulate this dynamic in different ways.”