La Jolla, CA – Once a toddler has mastered the art of walking, it seems to come naturally for the rest of her life. But walking and running require a high degree of coordination between the left and right sides of the body. Now researchers at the Salk Institute for Biological Studies have shown how a class of spinal cord neurons, known as V3 neurons, makes sure that one side of the body doesn’t get ahead of the other.

The findings, published in the Oct. 9 issue of Neuron, mark an important milestone in understanding the neural circuitry that coordinates walking movements, one of the main obstacles in developing new treatments for spinal cord injuries. In addition to establishing a balance between both sides of the body, they found that the V3 neurons ensure that the stepping rhythm is robust and well-organized. 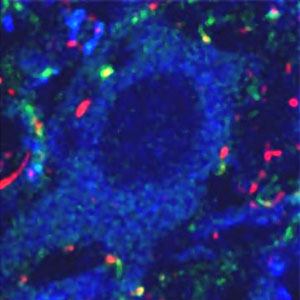 V3 neurons (shown in green) relay signals from nerve cells in the spinal cord to motor neurons (shown in blue), which cause muscles to contract (points of contact shown in yellow). In addition to establishing a balance between both sides of the body, V3 neurons ensure that the stepping rhythm is robust and well-organized.

“In the case of cervical spinal cord injuries, the spinal network that drives your limbs and allows you to walk is still there but no longer receives appropriate activating inputs from the brain.” says Martyn Goulding, Ph.D., a professor in the Molecular Neurobiology Laboratory, who led the study. “The fact that the V3 neurons are important for generating a robust locomotor rhythm makes them good candidates for efforts aimed at therapeutic intervention after spinal cord injury.”

V3 neurons are so called interneurons, which relay signals from the nerve cells in the spinal cord to motor neurons, which cause muscles to contract. Spinal interneurons form complex networks-commonly referred to as CPGs, short for central pattern generators-that function as local control and command centers for rhythmic movements, which lie at the heart of all locomotion.

Although scientists had known about the locomotor CPG for a long time, they were unable to identify the nerve cells that make up these circuits. When Goulding and others began to break the molecular code that makes these different interneuron cell types, they could start to unravel the wiring of the spinal cord to see how it works.

Neurons in the brain and spinal cord come in two flavors, excitatory neurons that transmit and amplify signals and inhibitory neurons that inhibit and refine those signals. Previously, Goulding and his team discovered that a subset of inhibitory interneurons, the V1 neurons, control the speed of motor rhythm and thus set the pace at which animals walk, while a second group of inhibitory neurons, called V0 neurons, govern the left-right alternating pattern of activity that is needed for stepping, as opposed to hopping, movements. In their latest study, they turned their attention to a class of excitatory neurons, the so-called V3 neurons.

“Most models of the CPG include an inhibitory element that switches off motor neuron activity on one side in order to initiate the next step on the other side of the body, which allows you to walk, hop, skip, and run,” says Goulding. “V3 neurons provide an additional level of control, which makes sure that when you walk and run, the intensity of the activity is matched on both sides of the body. If that were not the case, we would be unable to walk or run along a straight line.”

In the study, postdoctoral researchers in the Goulding lab genetically engineered mice to specifically shut off their V3 neurons and reveal their function. The first author, Ying Zhang, Ph.D., then performed electrophysiological experiments on spinal cords isolated from these mice and found that without functioning V3 neurons, the length of individual motor neuron bursts began to fluctuate wildly. “Instead of a stable, alternating pattern, we found irregular oscillations between the left and the right side,” she says.

“A lot of research focused on the left-right coordination, but it has became clear that different levels of control allow for the fine-tuning of these rhythmic locomotor patterns,” says Zhang. “This study will allow us to put together a map of the neurons contributing to the CPG so that we can think about manipulating the CPG for therapeutic purposes.”

Since the activity of the motor neurons determines how much the muscle contracts and for how long, the researchers wanted to know how this irregular activity pattern of motor neurons influences the gait of mice strolling down a walkway. Taking advantage of the so-called AlstR/AL system, which was developed by Salk researcher Edward M. Callaway, Ph.D., a professor in the Systems Neurobiology Laboratories, the researchers temporarily shut off V3 neurons in adult mice and sent them on their way along a narrow plexiglas walkway. While the mice still alternated steps with their left and right hind limbs, the length of each step varied markedly, making it difficult for them to walk with a smooth cadence.

The research was supported by grants from the NIH and the Human Frontiers Science Program.