A drug-sensitive "traffic cop" tells potassium channels to get lost

A drug-sensitive “traffic cop” tells potassium channels to get lost

La Jolla, CA – Our brains are buzzing with electrical activity created by sodium and potassium ions moving in and out of neurons through specialized pores. To prevent the constant chatter from descending into chaos the activity of these ion channels has to be tightly regulated.

One possibility is to issue the channels a ticket straight to the cellular dumpster, discovered researchers at the Salk Institute for Biological Studies. A novel intracellular traffic coordinator pulls potassium channels from their job and whisks them to the recycling plant when not needed to put a damper on brain cells’ excitability, they report in the September issue of Nature Neuroscience. 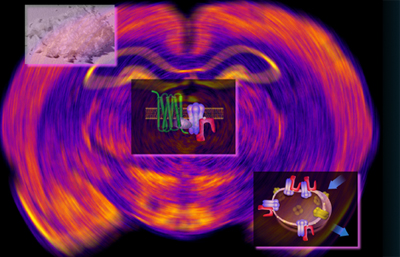 Collage contains images of methamphetamine crystals, a GIRK/SNX27/G protein-coupled receptor signaling complex, and an intracellular trafficking compartment, overlayed on a colorized image of SNX27 expression in the rat brain.

“Neurons have the task of integrating many incoming signals from other neurons and must strictly regulate their intrinsic membrane excitability,” says Paul A. Slesinger, Ph.D., an associate professor in the Peptide Biology Laboratory at the Salk Institute who led the study. “Controlling the surface expression of ion channels with the help of trafficking molecules is a very efficient way to do it,” he adds.

Brain cells signal by sending electrical impulses along their axons, long, hair-like extensions that reach out to neighboring nerve cells. They make contact via specialized structures called synapses, from the Greek word meaning “to clasp together.” When an electrical signal reaches the end of an axon, the voltage change triggers the release of neurotransmitters, the brain’s chemical messengers.

These neurotransmitter molecules then travel across the space between neurons and set off an electrical signal in the adjacent cell – unless the receiving end is decorated with so called GIRK channels, that is. In response to incoming signals, these channels open up, creating many little “potassium leaks” and as a result the signal fizzles.

Now, using a proteomics approach, Slesinger and his team searched for proteins that might regulate the activity of GIRK3 channels and found SNX27. “We knew that the GIRK3 subtype has a unique code on its tail, like a signpost, that might interact with other proteins” says Slesinger.

SNX27 is a member of the sorting nexin-family, a diverse group of proteins that can bind cellular membranes and make contact with other proteins, which testifies to their role as facilitators for membrane trafficking and protein sorting. Indeed, increasing SNX27 protein in cells led to reduced GIRK activity. A closer look revealed that SNX27 colocalizes with GIRK channels in the hippocampus, a structure that plays an important role in learning and memory.

“The expression of different types of GIRK channel subunits in neurons along with varying levels of specific trafficking proteins, such as SNX27, could dictate the ultimate expression levels on the surface of the plasma membrane, and therefore the strength of inhibitory signaling in the brain,” says Slesinger.

Interestingly, independent researchers found previously that abused drugs such as cocaine and methamphetamine increase the activity of the SNX27 gene in rats. “Changes in the expression of SNX27 may establish an important link between trafficking of GIRK channels and the action of drugs in the brain, possibly opening up new avenues for the treatment of drug addictions,” says Slesinger.