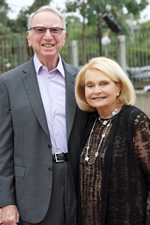 Irwin and Joan Jacobs, longtime supporters of the Salk Institute, helped to officially launch the Campaign for the Future, pledging $100 million to build the Joan and Irwin Jacobs Science and Technology Center.

The Jacobs’ gift is structured as a 1:2 match, wherein the Jacobs will contribute $1 for every $2 donated—up to $100 million—for every new gift or pledge made towards the capital construction or operational endowment for the new building.

For 60 years, the Salk Institute has pursued Jonas Salk’s vision of bold, collaborative science tackling some of the biggest challenges facing humankind. Innovations at Salk have led to new medicines, cutting-edge scientific methods and profound insights into human biology. The Campaign for the Future builds on Salk’s six decades of scientific discovery to turn dreams into reality and advance Salk’s pursuit of science into the next century.

To tackle the big problems of our generation, science must change—and Salk is leading the way.

Salk scientists are investigating—from a holistic perspective and across research boundaries—how cells, organs and systems interact to make us healthy or sick. Collaborative teams of dedicated scientists are spearheading efforts to visualize and make sense of massive data sets that new science is producing. They will decipher these “algorithms in nature” to glean an unprecedented understanding of health and disease.

Creating new research and collaboration space will help the Institute add to its world-renowned faculty from multiple disciplines and expand interactions between biologists, bioengineers, information theorists and many others as they collaborate on challenging problems.

We invite you to join us in changing the world by investing in Salk’s Campaign for the Future. Together, with supporters like you, we will advance audacious and innovative scientific solutions to the most difficult health challenges of our generation.