The Salk Institute was established in 1960 by Jonas Salk, MD, developer of the first safe and effective polio vaccine. Salk selected world-renowned architect Louis I. Kahn to design the research facility he envisioned would contribute to the betterment of humankind.

Salk directed Kahn to create spacious, unobstructed laboratory spaces that could be adapted to the ever-changing needs of science. The building materials had to be simple, strong, durable, and as maintenance-free as possible.

Kahn’s masterwork consists of two mirror-image structures—each six stories tall—that flank a grand travertine courtyard. Three floors house laboratories and the three levels above them provide access to utilities. Towers jutting into the courtyard provide study space for senior faculty. Towers at the east end contain heating, ventilating and other support systems. At the west end are six floors of offices overlooking the Pacific Ocean. A total of 29 structures join to form the Institute.

The impact of Kahn’s architecture can be particularly felt in the travertine courtyard. Important to note are Kahn’s imaginative use of space and high regard for natural light. In response to Salk’s request that the Institute be a welcoming, inspiring environment for scientific research, Kahn flooded the laboratories with daylight. On the laboratory levels, he built all the exterior walls out of large, double-strength glass panes to create an open, airy work setting. Local zoning codes restricted the height of the buildings so that the first two stories had to be underground. This did not, however, prevent the architect from bringing in daylight: he designed a series of light wells 40 feet long and 25 feet wide on both sides of each building to bring daylight into the lowest level. 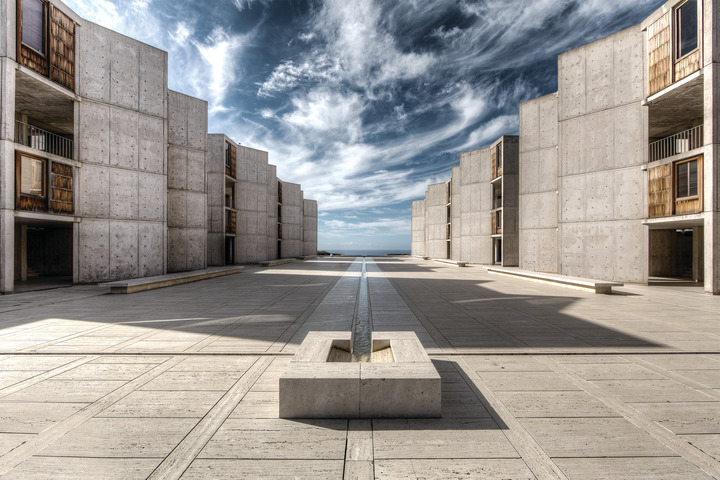 Salk and Kahn’s collaboration resulted in a blueprint uniquely suited to a scientific research center. The next challenge was to realize it through the use of materials that could last for generations with only minimal maintenance. Chosen to meet this criteria were concrete, teak, lead, glass and steel. The poured-in-place concrete walls deliver the first bold impression for visitors. Kahn actually went back to Roman times to rediscover the waterproof qualities and the warm, pinkish glow of “pozzuolanic” concrete. Once the concrete was set, he allowed no further processing of the finish—no grinding, no filling, and above all, no painting. The architect also chose an unfinished look for the teak surrounding the study towers and west office windows, and he instructed that no sealer or stain be applied to the teak. The building’s exterior, with only minor required maintenance, today looks much as it did in the 1960s.

The open courtyard of travertine marble acting as a facade to the sky adds to the monumental nature of the building. In 1992, the Salk received a 25-Year Award from the American Institute of Architects (AIA) and was featured in the AIA exhibit Structures of Our Time: 31 Buildings That Changed Modern Life. The Salk Institute has been described in the San Diego Union-Tribune as the single most significant architectural site in San Diego.